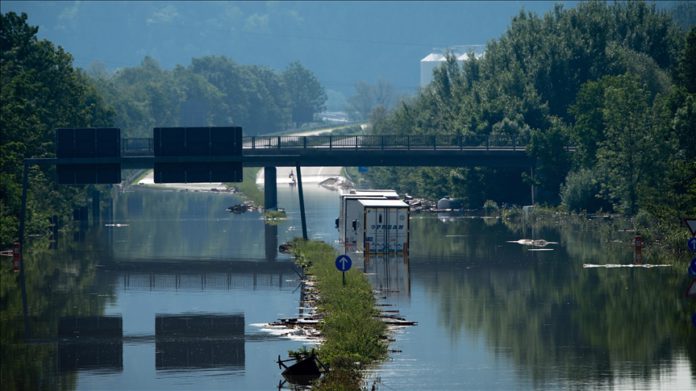 The death toll in Germany from the worst flooding in over 200 years rose to at least 21 as dozens of people are still missing, police said Thursday.

The extent of the damage and the overall situation in two of Germany’s most affected flood-stricken states — Rhineland-Palatinate and North Rhine-Westphalia — remains unclear as rescue workers had to cope with torrential rainstorms which brought down 148 liters of rain per square meter within 48 hours.

At least 13 people have died in Germany’s populous state North Rhine-Westphalia when they were surprised by the flash floods.

Many villages and small towns in western and southwestern parts of the country were cut off by floodwater and landslides that made roads impossible to pass.

Authorities have declared a state of emergency in the crisis region after days of heavy rainfall that also hit large sections of western Germany, causing major damage.

Reacting to the catastrophe in the flood-stricken Rhineland-Palatinate, Malu Dreyer, prime minister of the state, described the situation in the flood areas as a “disaster” that has never been witnessed before.

“There are dead, there are missing, there are many who are still in danger,” said Dreyer whose state had already seen some heavy floods in the past.

“We have never seen a disaster like this. It’s really devastating. Whole places have been flooded, houses have simply swum away,” she added.

Dreyer’s comments were echoed by Armin Laschet, premier of North Rhine-Westphalia and the conservative candidate to succeed Chancellor Angela Merkel who toured the crisis-hit region earlier in the day.

Meanwhile, Merkel express shock over the deadly floods in Rhineland-Palatinate and North Rhine-Westphalia.

“I am shocked by the disaster that so many people have to suffer in the flood areas. My condolences go out to the relatives of the dead and missing. I thank the many tireless helpers and emergency services from the bottom of my heart,” she tweeted.

UN rights office ‘alarmed’ at state of prisons in Syria

Oil prices down with rise in US crude, gasoline stocks