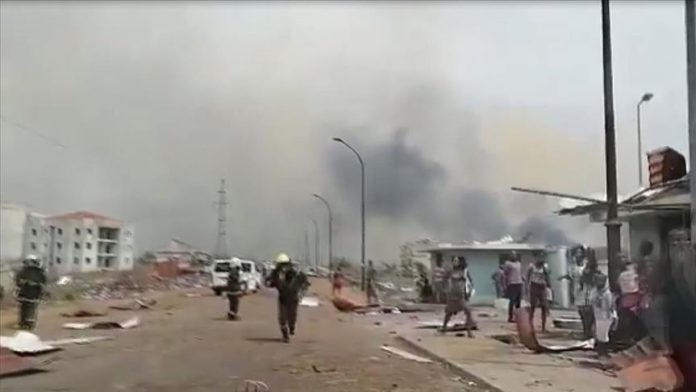 The death toll from a series of explosions at an army barracks in Bata, the most populous city in Equatorial Guinea, has risen to 98, according to the Health Ministry.

In a tweet Monday, the ministry also said attention to the 615 people who were injured has been reinforced with specialists from Ebebeyin, Centro Sur and Mongomo.

The ministry said 316 of those injured have been discharged and 299 remain admitted at Bata Regional Hospital, La Paz Medical Center and Guinea Salud Polyclinic.

He said the incident was due to “negligence and mishandling of dynamite” at the military barracks in the Mondong Nkuantoma neighborhood which damaged almost all the houses and buildings in Bata.

The president said he instructed the authorities to investigate the incident and gauge the damage caused. He also called on people to remain calm.

The statement said the president launched an appeal to seek the support of the international community and national benefactors for Equatorial Guinea in these difficult times, which coincide with an economic crisis due to a fall in oil prices and the COVID-19 pandemic.

“Our health professionals continue to provide care at the scene of the tragedy and in health centers,” the Health Ministry tweeted late Sunday.

The injured were transported to Bata General Hospital, Hospital La Paz and Nuevo Inseso Hospital, according to the ministry.

Equatorial Guinea is a Central African country comprising the Rio Muni mainland and five volcanic offshore islands. The capital, Malabo, on Bioko Island, is a hub for the country’s prosperous oil industry.
Bata is a port and commercial city on the country’s mainland.
The country’s economy relies heavily on its oil and natural gas industry, which accounted for more than 60% of its gross domestic product, 80% of its fiscal revenue and 86% of its exports in 2015, according to the International Monetary Fund’s country reports.