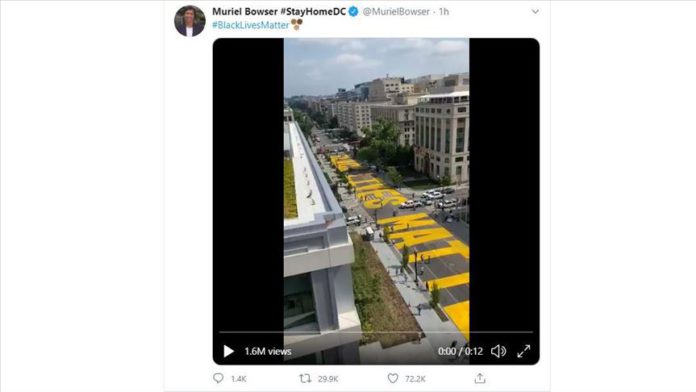 “BLACK LIVES MATTER” was written in large yellow lettering that spanned over a block along 16th street, northwest, which runs to a park adjacent to the White House complex that was the site of federal law enforcement’s violent dispersal of protesters on Monday ahead of a Trump photo opportunity.

Bowser posted a video of the street mural to Twitter as the capital’s signature Go-go music thundered in the background.

John Falcicchio, Bowser’s chief of staff, said the mayor was honoring “demonstrators who” were seen “peacefully protesting on Monday evening” before they were removed from the area.

It was also a response to the White House’s subsequent decision to expand the executive mansion’s security perimeter up the street.

“There was a dispute this week about whose street this is. Mayor Bowser wanted to make it abundantly clear that this is DC’s street,” said Falcicchio.

Bowser said she will not be extending the state of emergency and curfew for the nation’s capital after no individuals were arrested Thursday night as demonstrations continued against racial injustice.

“We are well equipped to handle large demonstrations and First Amendment activities,” Bowser said in a letter sent to Trump June 4, adding that the mass deployment of unidentified federal officers and equipment are “inflaming demonstrators” and adding to their grievances.

Demonstrations against police brutality have continued for more than a week nationwide following the death of George Floyd who died after a Minneapolis, Minnesota police officer pinned his neck to the ground during an arrest for nearly nine minutes.

The fired officer has been charged with second-degree murder. Three other officers at the scene have also been dismissed and charged.