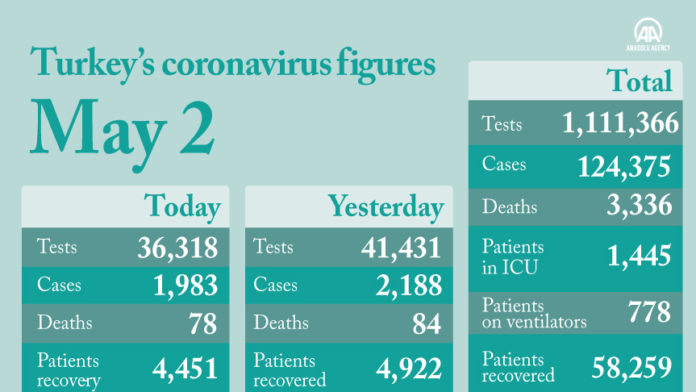 The number of coronavirus cases has been reported below 2,000 in Turkey for the first time since March 30, the health minister said on Saturday.

A total of 58,259 patients have recovered from the coronavirus as the country continues to take measures against the novel virus, Fahrettin Koca said on Twitter.

On Saturday, 4,451 recoveries were reported, a figure which more than doubled the new cases registered over the past day for the second day in a row, according to Koca.

Meanwhile, the death toll from coronavirus climbed to 3,336 as Turkey registered 78 more deaths — a figure below 80 for the first time after a long time — in the past 24 hours, said the health minister.

The country, meanwhile, continued to conduct a growing number of tests daily.

In the last 24 hours, over 36,000 additional tests have been conducted, and the total number of tests exceeded 1.11 million.

Later on Saturday, Koca took Twitter to announce that Turkey set up a laboratory with a capacity to conduct 5,000 tests daily.

The lab was established in Kocaeli’s Gebze district in northwestern Turkey with the support of the Industry and Technology Ministry and Kocaeli Chamber of Industry, he added.

More than 3.4 million cases have been reported in 187 countries and regions since the virus emerged in China last December, with the US and Europe the world’s hardest-hit areas.

A significant number of COVID-19 patients – over 1.07 million – have recovered, but the disease has also claimed more than 242,000 lives so far, according to data compiled by the US’ Johns Hopkins University.