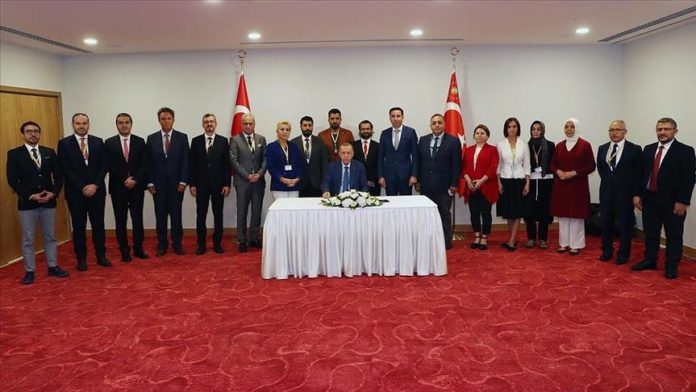 Any new Cyprus talks that fail to guarantee the vested rights of the island’s Turkish Cypriots are doomed to fail, the Turkish president said on Wednesday.

“The time has come for the negotiations to be conducted between two states, not between two communities,” Recep Tayyip Erdogan told reporters en route from a visit to the Turkish Republic of Northern Cyprus (TRNC).

“For this reason, we’re determined not to bring third parties between us, and we cannot accept such a thing.”

Erdogan stressed that the Turkish side opened a new page on the Cyprus issue without changing their constructive understanding.

Instead of sticking to parameters that have proved not to provide a solution on the island – seeking a federation of communities – Erdogan said the Turkish side put forth a fair, sustainable, and realistic solution.

When asked if the Greek Cypriots could join NATO, Erdogan said it cannot join the military alliance unless Turkey gives a “positive answer.”

Turkey has been a member of NATO for nearly 70 years.

The Greek Cypriot administration entered the EU in 2004, the same year Greek Cypriots thwarted the UN’s Annan plan to end the decades-long dispute.

Seeking a fairer approach to the Cyprus issue, Turkey and Turkish Cyprus have proposed establishing a cooperative relationship between the two states on the island, with both enjoying equal international status.