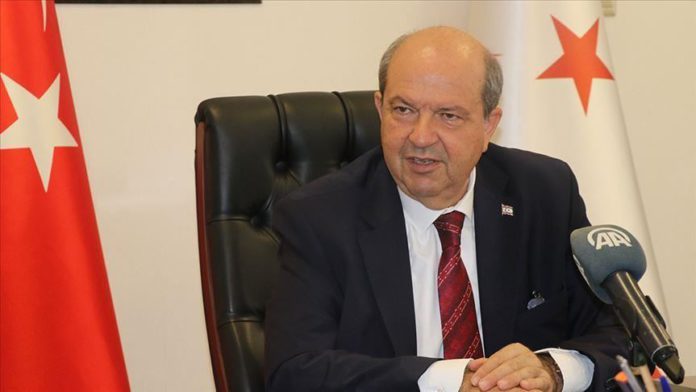 The Turkish Cypriot prime minister said Saturday no one has a right to put Turkish Cypriots into risk by calling for a federal solution to resolve the Cyprus issue.

Ersin Tatar discussed the Cyprus issue and recent developments in a TV program on Saturday, according to a statement by the press office of the National Unity Party.

Referring to the UN Secretary-General Antonio Guterres’s intention to start the negotiation process after the presidential election in the Turkish Republic of Northern Cyprus (TRNC), Tatar said: “In Crans-Montana [2017 talks in Switzerland], the opportunity was missed, [Turkish Cypriot] President Mustafa Akinci also said the federation [probability] was over after the meetings in 2017 and that this was the last attempt of their generation but later he [Akinci] reverted.”

Tatar pointed out that what matters is national interests and expectation of the Turkish Cypriots.

He said the Turkish Cypriots know very well that the Greeks do not want an agreement on the basis of political equality.

“We do not want to be dragged into an adventure by calling for a federal solution. In these times, nobody can put the people at such risks,” said Tatar.

He also noted that the TRNC should seek for an agreement based on Turkey’s active role and guarantorship.

He went on to say that if he is elected in the presidential elections scheduled for Oct. 11, he will push a solution on the basis of sovereign equality.

“Peace came to Cyprus in 1974. We don’t run away from the negotiation table, but once we start negotiation, we openly ask for clarification of its basis as well as the calendar.

“If a process starts, we will bring not only a federal solution but also alternatives to the table. We will push for a solution on the basis of sovereign equality. I must say that nothing will ever be the same again,” he added.