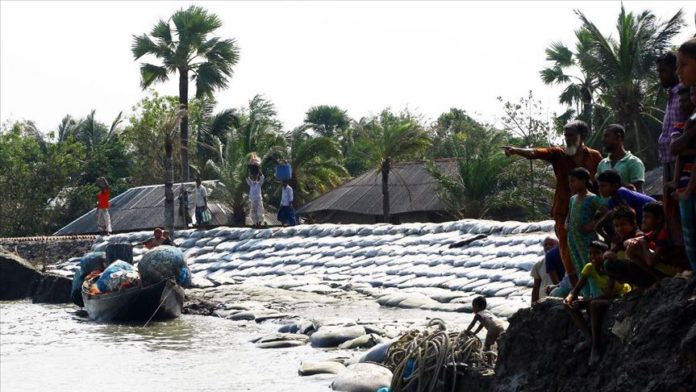 Bangladesh and India have issued warning bulletins, as the cyclone Amphan, one of the worst storms over the Bay of Bengal in years, is likely to hit their coasts by Wednesday evening.

Officials in both South Asian countries are expecting massive destruction when winds gusting up to 185 kilometers (114 miles) per hour cross Hatiya island of Bangladesh and Indian states of West Bengal and Odisha.

Around three million people have been moved to over 15,000 shelters in both countries.

India reported its first casualty on Wednesday, when a 57-year-old woman died, who instead of moving to shelter had chosen to stay at her home in the Satbhaya district in Odisha.

Bangladesh Meteorological Department confirmed that a great danger signal has been raised for Cox’s Bazar port, which hosts over a million Rohingya refugees.

“Very likely to move north-northeastwards across the northwest Bay of Bengal and cross West Bengal – Bangladesh coasts between Digha in West Bengal and Hatiya Islands in Bangladesh, close to Sundarbans [World’s largest mangrove forest], during the afternoon to evening hours of today,” said the bulletin issued by the Indian Meteorological Department.

Speaking to Anadolu Agency, Bangladesh’s Disaster Management and Relief Secretary, Shah Kamal, said that the government has prepared to shift around 2.2 million people to 12,078 safe centers in the coastal regions.

Quoting meteorological office, state-run Bangladesh Sangban Sangstha news agency said that the sea will remain high due to wind speed within 85 km of the cyclone center with storms unleashing the area with a speed from 124-136 mph.

The COVID-19 or coronavirus pandemic is hitting both India and Bangladesh in its plans to shelter cyclone-affected people in large numbers.

Both countries have so far reported 132,007 infected cases with 3,673 deaths, according to the John Hopkins Coronavirus Resource Centre.

In India’s eastern state of Odisha, the authorities say that they had fewer shelters left to house cyclone-affected people, as many of them have been turned into Covid-19 quarantine centers. The physical distancing measures in the Bangladesh coastal areas are also going for a toss raising concerns of the spread of the pandemic.

“Amid such a crisis it is not possible to maintain social distancing by the destitute people most of whom are illiterate. People have gathered at the shelters with their kids and requirements. There is a chaotic environment,” Md. Mohiuddin, a resident of southern Barguna district, told Anadolu Agency.

Local administration of the Barguna district, however, claimed that they were trying their best to control people and maintain health guidelines and social distancing.

“We will provide them dry food including baby foods so that people stay there without any tension and maintain social distancing,” Md. Matiul Islam Chawdhury, deputy commissioner of southern Patuakhali district told Anadolu Agency.

“At least the government should provide sufficient masks to the people at centers and advise them not to touch each other. Soon after the cyclone, people should leave the shelters. Otherwise, COVID-19 may deteriorate situation rapidly,” he said.

Turkey’s largest observatory to operate in 2021