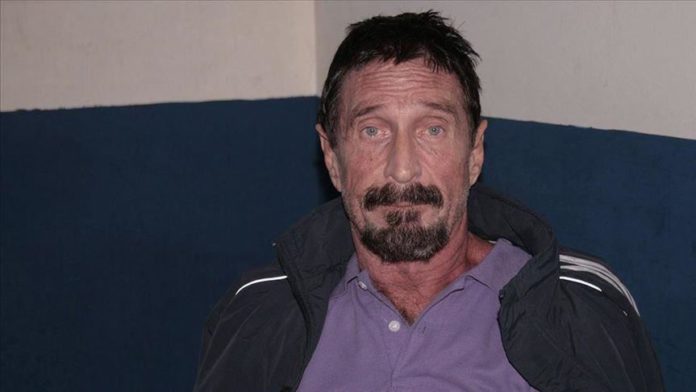 John McAfee, the creator of the anti-viral software that bears his name, was arrested in Spain before catching a flight to Istanbul, Spanish news agency EFE reported on Tuesday.

McAfee was arrested on Saturday in Barcelona’s El Prat airport after authorities identified him as the target of an international arrest warrant related to accusations of tax evasion in the US, police sources told EFE.

The US Department of Justice confirmed his arrest in Spain on Monday, when it unsealed an indictment against McAfee. In it, prosecutors allege he failed to file tax returns in 2014-2018 despite making millions of dollars from promoting cryptocurrencies, consulting work, speaking and selling the rights to his life story for a documentary.

McAfee allegedly evaded taxes by funneling his income into bank accounts and cryptocurrency exchange accounts under the names of others and concealed assets like property, a vehicle and a yacht in the same way, according to the indictment.

If he is convicted of all charges, he could face up to 30 years behind bars.

He is reportedly being held in a Barcelona prison where he is pending extradition to the US.

This is not the first time McAfee, 75, has been arrested. Last year, he was detained and later released by officials in the Dominican Republic after he and five others were suspected of traveling on a yacht with high-caliber weapons and ammunition.

He also made headlines after fleeing his residence in Belize when police sought to question him for the murder of a neighbor in 2012. In 2019, a Florida court ordered him to $25 million in a wrongful-death lawsuit brought on by the murdered neighbor’s estate, which he said on Twitter he would not pay.

McAfee also tried to run for the US presidency as a libertarian in 2016.

In September, he shared his opinion on the ongoing US presidential campaign with his 1 million Twitter followers.

“Who am I voting for? No-one. Why would I choose one person over another to control me? Slave masters are the same,” he wrote.