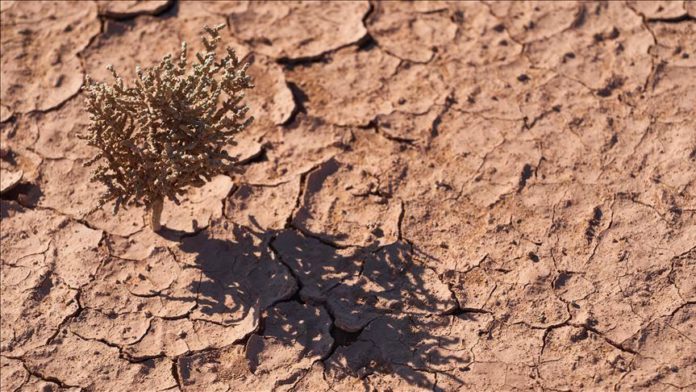 The first thing to be done in the fight against desertification is to prevent land degradation and then engage in restoration that rehabilitates the destroyed land, experts said.

Caused primarily by human activities and climatic variations, desertification directly affects human life and the sustainability of the planet.

Observed on June 17 each year, the World Day to Combat Desertification and Drought is a UN observance day which focuses on changing public attitudes toward the leading driver of desertification and land degradation.

On the occasion of the day, Deniz Atac, CEO of the Turkish Foundation for Combating Soil Erosion, for Reforestation and the Protection of Natural Habitats (TEMA), and Hikmet Ozturk, deputy general manager of the foundation, spoke to Anadolu Agency about afforestation activities and creating awareness on healthy nature.

Contrary to common belief, desertification, which is seen as the “expansion of existing deserts,” refers to the degradation of land in arid, semi-arid and dry sub-humid areas where land productivity decreases, said Ozturk.

“The destruction of natural areas, degradation of an agricultural area or loss of it by erosion, the covering of agricultural land with concrete and asphalt or drying of wetlands and decreased water presence are all examples of desertification,” he noted.

“The human pressure on nature has decreased somewhat during the lockdown time due to the pandemic […] It is also possible to estimate a decrease in forest fires,” he said, responding to questions on whether there have been any changes in forests during the COVID-19 period.

However, he said, there is still a need for statistical data to confirm the decrease in forest fires.

Mentioning the effects of COVID-19 on planting trees in Turkey, Atac said planting activities were not affected by the virus as that work was completed in the mid-March period when the country was just seeing its first cases.

Only maintenance work coincided with the pandemic measures, she said.

“As in agriculture, the necessary maintenance work for afforestation activities was carried out by following the social distancing rules and taking other necessary measures.”

Speaking on environmental awareness, which is also a key theme of the day, Atac thinks people’s awareness of the environment and passion for nature increased during the period when they stayed home due to the virus.

“The developments observed in nature showed us that nature can actually renew itself. It does not need us. In the COVID-19 period, we once again saw that the best way to protect nature is never harm it,” she added.

However, she stressed that awareness should increasingly continue and everyone should be responsible for keeping nature safe which would be possible with educational planning implemented from young ages.

“As the TEMA Foundation, we have determined as one of our missions to raise generations that understand, protect and love nature while performing our afforestation activities. Our children should be more interested in nature, to raise generations that know, love and protect nature and see themselves as a part of nature, not as an owner,” Atac said.

Founded in 1992, TEMA is the country’s leading environmental advocacy group which focuses on preserving nature by combating erosion and carrying out forestation projects.

Atac went on to say that TEMA, which has reached out to more than 4 million children so far, has been implementing Nature Education Programs in 81 provinces in cooperation with the country’s Education Ministry to children from pre-school to the high school level.

Touching on the environmental activities and works of Hayrettin Karaca, who was Turkey’s honored “Grandpa Earth” and co-founder and honorary president of TEMA, Atac said he devoted his life to protecting nature.

“Building awareness on soil conservation and erosion in Turkey, the establishment of TEMA with his colleague Nihat Gokyigit, who is known as Grandpa Leaf, are two of his most important legacies,” she said.

Karaca would trust the Anatolian culture and people very much, he adored every person in Anatolia, especially youth and children, Atac said.

“He participated in numerous studies both individually and abroad. He received awards. However, one of his most important achievements was becoming Turkey’s ‘Grandpa Earth,’ as he expressed many times,” she noted, adding he set foot in nearly every corner of Turkey for the country’s nature.

As a scientist and one of Turkey’s pioneering environmental activists, he received many field honors, including the UN Forest Hero Award.