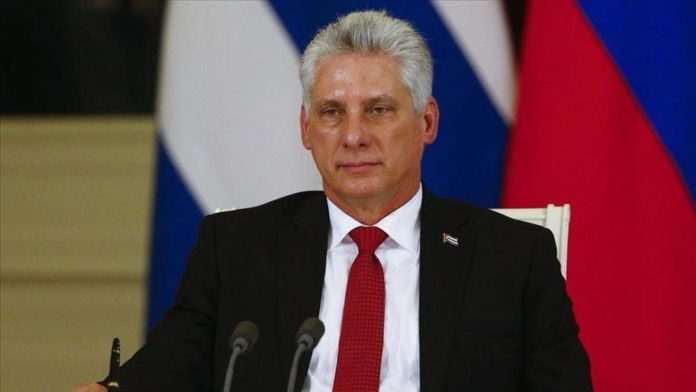 Cuban President Miguel Diaz-Canel said on Monday that the policies adopted by the United States against the island provoked “social outbursts in the country”, a day after thousands of Cubans took to the streets to protest against the government in the midst of a health and economic situation caused by COVID-19.

In a live television broadcast, Diaz-Canel said that his government has tried to “face and overcome” difficulties amid “a policy of economic asphyxiation to provoke social outbursts in the country”.

Diaz-Canel said that demonstrators “got what they deserved”, in reference to the repression against the protests.

“Yesterday we saw criminals. The protest was not peaceful, there was vandalism, they stoned foreign currency stores, items were stolen,” the president said, as he blamed US-orchestrated social media campaigns for manipulating protesters.

For the first time in the country’s history, thousands of people demonstrated in Havana and other cities of the island against severe blackouts, food shortages, a coronavirus outbreak and an economic crisis exacerbated by US sanctions imposed by former President Donald Trump.

US President Joe Biden said on Monday that he supports the Cuban people and their call for freedom.

“We stand with the Cuban people and their clarion call for freedom and relief from the tragic grip of the pandemic and from the decades of repression and economic suffering to which they have been subjected by Cuba’s authoritarian regime,” Biden said in a statement. “The United States calls on the Cuban regime to hear their people and serve their needs at this vital moment rather than enriching themselves.”

Mexico could “help with medicines, with vaccines, with whatever is required and with food, because health and food are fundamental human rights”, said the leftist president in his morning conference.