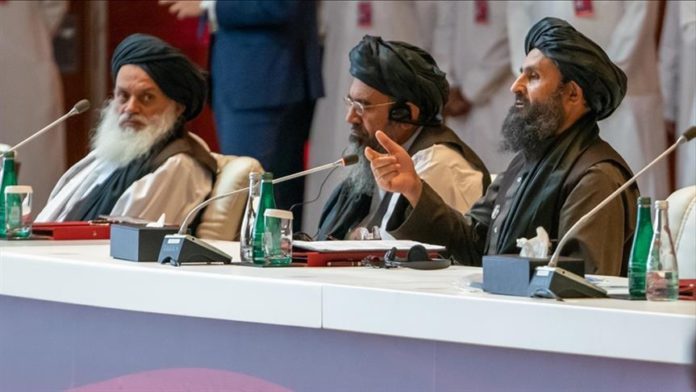 A crucial round of the so far stalled intra-Afghan peace talks began in the Qatari capital Doha with senior figures from the Afghan government and the Taliban sitting across the table.

In his opening remarks, the Taliban’s deputy head Mulla Abdul Ghani Baradar said that peace and prosperity will prevail in Afghanistan with a “strong, centralized and independent Islamic system.”

In a clear reference to Afghanistan’s current democratic system of governance, he went on to say that “foreign” ideas and systems will not help with the country’s problems.

“We want progress, we want a good and comfortable life, but not at the cost of our Islamic values, independence, and freedom,” Baradar, one of the founding members of the Taliban movement in the 1990s, said.

The head of the Taliban’s Qatar office further said these “high targets” will be achieved through mutual cooperation.

The Afghan government is represented at these crucial talks with the Taliban by a top official delegation led by the chairman of the peace council, Abdullah Abdullah.

Speaking in Doha, Abdullah warned that the main victims of Afghanistan’s continuing violence are its people. “It does not matter if the Afghan government uses force or the Taliban try to win through violence and war, the main losers in the current war are the people of Afghanistan.”

He stressed that the Afghan people are going through a difficult time and that believing in a military solution or emphasizing victory through force and violence is pointless.

“Achieving peace requires flexibility on both sides,” he added.

What’s on the table?

Sources in the Afghan government’s peace delegation told Anadolu Agency that the Taliban had floated the idea of an extended cease-fire provided up to 7,000 more of their captives are freed by the Afghan government. They, sources said, also want their leaders to be removed from the UN sanctions list.

The Afghan government, on the other hand, has been hesitant to accept this idea as a way out after seeing many of the 5,000 Taliban who has already been freed return to the battlefield.

Last week, the top US peace broker Zalmay Khalilzad began his shuttle diplomacy tour of Qatar, Uzbekistan, and Pakistan amid ensuing violence across Afghanistan. In a series of tweets, an Afghanistan-born seasoned US diplomat said he was returning to Doha and the region to continue “determined diplomacy” in the pursuit of a peace agreement between the Islamic Republic of Afghanistan and the Taliban.

Afghan forces, on the other hand, claim to kill around 200 insurgents every day in counterterrorism operations.

The intra-Afghan peace talks in Doha are part of the US-Taliban peace deal inked in February 2020, but both the Afghan government and the Taliban have been blaming each other for the lack of progress on the negotiation table since then.