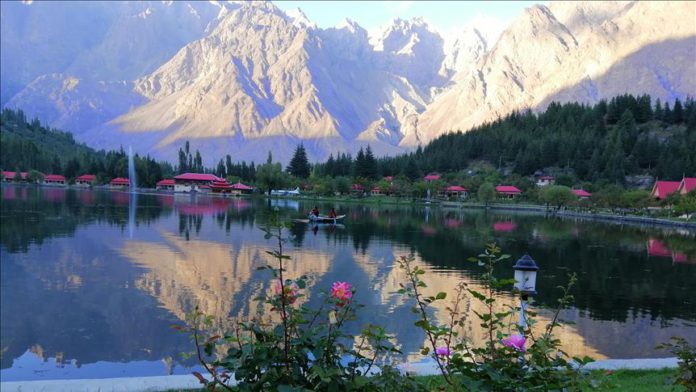 The China-Pakistan Economic Corridor (CPEC) is transforming the remote but spectacular Gilgit-Baltistan or the GB region of Pakistan.

Formerly known as the Northern Area and once part of the erstwhile state of Jammu and Kashmir, the region at the confluence of world’s greatest mountain ranges – the Karakoram, the Himalaya, the Hindukush, and the Pamir – is witnessing a brain gain, as people return to invest in the region.

Rich in history, culture, and natural beauty the area which also remained a center of rivalries between Russian, British and Chinese empires has been a cynosure of trekkers and adventure tourists over centuries.

Hassan Nasar 46, has returned from Bangkok, the capital of Thailand, and has established business of precious and semi-precious stones business in Gilgit, the provincial capital of GB. Since the region became a gateway for the multi-billion dollar CPEC, banks, investors, food chains are moving into the mountainous region.

“I have moved here [Gilgit] from Bangkok in April this year and invested a hefty sum because this city is the future business hub after the CPEC becomes fully operational,” said Nasar, owner of Gems Gallery located in the beautiful city market.

Scores of people in the picturesque market in the city, which is about 600 kilometers (372 miles) from the Pakistani capital of Islamabad told Anadolu Agency that CPEC is turning a gamechanger and is changing their fortunes.

The $64 billion CPEC — a network of roads, railways, and pipelines — is aiming to connect China’s strategically important northwestern Xinxiang province to the port of Gawadar in far away in Balochistan.

While the corridor will give China easy access to Africa and the Mideast, it will make Pakistan earn billions of dollars and spur business activities along the road network replacing the fabled Silk Road.

Nasar, however, said while business prospects are fabulous, the weather plays a spoiler, referring to the harsh winter season from November to March when most of the areas get blocked by heavy snow.

Speaking to Anadolu Agency former Chief Minister of GB Hafiz Hafeezur Rehman said the government has developed the infrastructure to attract more tourists and investors over the past five years. He completed his five-year tenure on June 23.

On the pattern of investments, Rehman said those who want to invest in dollars will have to come here though the Pakistan government and those who invest in local currency need to approach directly to the local authorities. He described the blocking of roads due to snowfall an impediment in the way of large investments.

According to the officials, the region has great energy potential due to huge water resources. They believe that the region can generate over 50,000-megawatt electricity from water.

“We want to invite the Turkish companies to come and invest in the power sector,” said the former chief minister.

The region is accessible through Karakoram and Kaghan-Naran highways. But the

Naran-Babusar road, which connects Chillas district of GB, remaining close for six months during winter due to heavy snowfall.

The local people use 784 km. (487 mi) Karakoram Highway in winter. The road is considered as the eighth wonder of the world due to its high elevation and crisscrossing highest mountains.

Completed in 20 years by Chinese and Pakistani engineers, as many as 1,000 people lost their lives during its construction. The road passes through extremely dangerous Rocky Mountains overlooking the fast-flowing Indus river, thousands of feet below.

The travelers here also witness the confluence of the three highest mountain ranges with Gilgit River melting into the Indus River at the same junction.

“This is a very beautiful location where you can see the three big empires [ world’s highest mountains] meeting each other,” said a tourist Adnan Chaudhary, who has arrived from Lahore, a city of northeastern Punjab province.

However, the 136 km (84 mi) part of Karakoram highway from Thakot to Raikot, Gilgit Baltistan, is a hectic journey due to poor road conditions.

Raikot town, is also the gateway to Nanga Parbat, the ninth highest mountain in the world with an altitude of 8,126 meters (26,660 feet).

A tourist Shaistan Bahar said it took her 18-20 hours to reach Gilgit because of poor road conditions from Thakot to Raikot.

But what is worrying people in the region is the fast melting of glaciers, which often leads to flash floods in the region. Last year Pakistan had been ranked fifth on the list of countries vulnerable to climate change by the Global Climate Risk Index for 2020.

The Siachen Glaciers, known as the world’s highest battlefield, are also located in the GB region, which includes the world’s second-longest glaciers, stretching an impressive 76 km (47 mi).

Pakistani meteorological reports in 2017 had warned that Himalayan glaciers have been shrinking for the past 30 years, with losses accelerating to alarming levels in the past decade. It suggested the Siachen glaciers are like a natural dam that could save Pakistan and India for future generations.