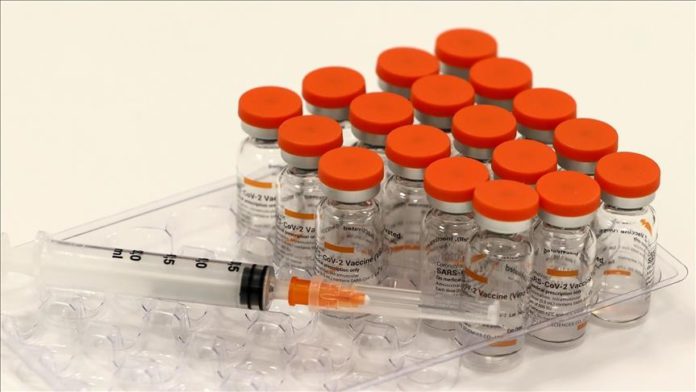 A staunch supporter of the opposition Movement for Democratic Change Alliance in Zimbabwe, 29-year-old Mateline Chiwandamira is waiting for a signal from the party president, Nelson Chamisa, whether or not to take the COVID-19 vaccine.

As politicking around vaccines heats up in the country, many party workers, like Chiwandamira, are still sitting on the fence, waiting for their party leaders’ nod to get vaccinated.

For 51-year-old Gift Mavesere, who is a die-hard supporter of the governing Zimbabwe Africa National Union Patriotic Front (ZANU-PF) party, the signal from his party has been very clear.

“The president spoke and there are no two ways about it, which means everybody whether in the ruling party or the opposition have to take the vaccines. I took mine with no difficulty,” Mavesere told Anadolu Agency.

“If my party shows that it trusts the Chinese vaccine, I will take it with no hesitation. I don’t trust anything we are told by the ZANU-PF government because top officials there do underhand dealings with China at the detriment of ordinary people,” Chiwandamira voiced his concerns while speaking to Anadolu Agency.

As such, in Zimbabwe, the COVID-19 vaccines are being politicized, with supporters of opposition parties openly distrusting Chinese vaccines while the ruling ZANU-PF party urging everyone to take the vaccines donated by the Asian giant.

“Even as some of our own leaders have taken the jabs, there has been no clarity about the Chinese vaccines’ safety and side effects explained to ordinary people by the ZANU-PF government. What we are being told is to accept the vaccines, at times with threats of joblessness if we don’t take the Chinese vaccines,” said Chiwandamira.

As the Chinese vaccines hit the market in Zimbabwe, the opposition and ruling party politicians started playing politics over the vaccines.

Chiwandamira says campaigns for and against the available vaccines in the country have become the order of the day.

The ZANU-PF, a bitter rival of the MDC Alliance, has openly accused the country’s opposition of inventing conspiracy theories against the Chinese vaccines and favoring the Western jabs.

While launching China’s Sinovac vaccine in Victoria Falls on March 24, where he received his first jab, Zimbabwean President Emmerson Mnangagwa took aim at the opposition politicians for denigrating the Chinese vaccines.

“It is rumored that some people from certain political persuasions have gone to certain embassies quietly to get vaccinated. As time goes by, we will get to know them,” Mnangagwa said, apparently pointing finger at the opposition politicians.

Though Zimbabwe’s opposition MDC Alliance has not been vocal in support of the Chinese vaccines, it has denied the impression that it is opposing vaccination.

“I have never seen the MDC Alliance opposing the vaccination of our people. The ZANU-PF is creating its own propaganda and running with it,” Job Sikhala, the MDC Alliance’s national deputy chairperson, told Anadolu Agency.

Zimbabweans are being vaccinated with the Sinopharm and Sinovac vaccines obtained from China, with the Southern African nation expecting delivery of more vaccines from India, Russia and the UK.

“Fighting the pandemic is a collective effort that offers no room for politicking. The central objective must always be to save lives and mitigate suffering. Medical experts must lead the decision-making process in terms of vaccines here. We urge transparency in procurement procedures and a widespread communication drive to help citizens make informed health choices,” Fadzayi Mahere, the MDC Alliance national spokesperson, told Anadolu Agency.

But ordinary Zimbabweans like Ndlovu sharply differ from Kandishaya.

“Personally, I have my own reservations around the Chinese Sinopharm vaccine, but I wouldn’t discourage anyone from taking the vaccine,” he said, adding: “My reservation stems from the fact that the Chinese are donating these things.

Ndlovu believes it is a case of an experiment where “the Chinese are trying to experiment on us and before we know it, we will have people with deformities.”

For Claris Madhuku, a civil society activist who heads the Platform for Youth Development, “so far there have been no serious complaints from those who have been vaccinated with Chinese vaccines. I have no reason so far not to trust the vaccine, but it still must be taken as per individual choice.”

Hilda Matarira, a professor in the Department of Medicine at the University of Zimbabwe in Harare, said: “The procurement of any public items should go through a strict system in Zimbabwe governed by an act of parliament.”

As Zimbabwe gets vaccine donations and buys as well from countries like China, Matarira said: “One hopes the law is followed,” adding, the reasons for political differences over vaccines and their safety need to be investigated.

Meanwhile, the Health Ministry said no fatalities have been reported so far after using the Chinese vaccines in Zimbabwe, clarifying people who received the vaccine jabs may experience mild headaches for some moments.

“This is how the vaccines work,” the ministry said in a bid to allay people’s fears about the safety of vaccines.