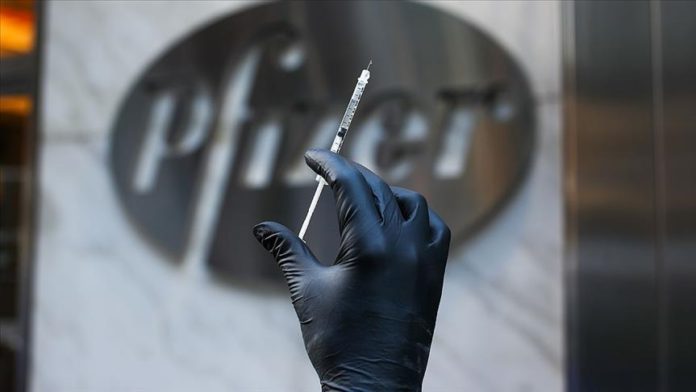 On a cold, gray Sunday in Western Michigan, big delivery trucks started rumbling out of a massive Pfizer distribution plant at 7000 Portage Road in Portage, Michigan.

Their mission? “The beginning of the end” of America’s COVID-19 pandemic, as many health professionals are calling it.

“I’m just beside myself,” West Michigan resident Mary Bennett told Anadolu Agency, as she waited in snow flurries to watch one of the trucks roll out.

There were a few onlookers, and a few passing drivers honked horns as they drove past, but it was an otherwise low-key rollout. And although federal law enforcement has been presiding over the vaccine roll-out, it wasn’t obvious on Sunday.

“It’s just wonderful about this vaccine,” said Bennett, “especially coming out of Kalamazoo.”

Kalamazoo and neighboring Portage are bursting with civic pride, knowing that their area will be forever cemented in the history books, the place where the raw materials for the vaccine are combined, and now, the starting point for shipment to the nation.

“I can’t even describe the pride,” Portage City Manager Joseph La Margo gushed, as he, too, waited outside.

Portage, a suburb of Kalamazoo, is home to the nearly two square mile Pfizer facility, its largest in the world, and the central hub for American distribution.

“Pfizer has supported our schools and our local businesses and brought in good-paying jobs,” La Margo said, he pointed out that Pfizer is a “generational” plant here in Western Michigan, a plant where many parents who work here, eventually make for their kids to work here.

Never before has a vaccine been so quickly developed, thanks largely to America’s “Operation Warp Speed,” which was formed earlier this year. And never during the pandemic has the situation been so dire in America: the country is seeing death rates top 3,000 victims every day.

The trucks, initially loaded with three million doses of the Pfizer vaccine, are bound for over 500 distribution sites around the country, either directly, or through airports. And it’s not just the vaccine on board — loads of dry ice help keep the vaccine at around minus 70 Celsius.

The US government is giving COVID flights — and COVID truck shipping — priority over all other air and ground travel.

The first vaccine shots are expected to be doled out on Monday; the Food and Drug Administration says the first shot alone would provide around 80% protection from the virus. A second vaccine shot, delivered a few weeks later, should provide 95% protection, according to the FDA.

A mix of government entities, healthcare outlets and private companies, including drugstore giants Walgreens, CVS Health and Rite-Aid, will oversee distribution, which some have compared to a war-time operation in size and scope.

From there, doses will go to those deemed essential workers, teachers and police officers and firefighters.

Later, comes 89 million Americans with pre-existing health conditions and those aged 65 and over.

But health officials think it won’t be until spring when the bulk of the U.S. population can walk into a doctor’s office or a drugstore and get the shot.

Each of the 50 states will have to work out their own logistics for doling out shots, depending on how much vaccine — and money — they have to work with.

CDC advisors say Congress needs to agree on a budget plan that calls for billions of dollars to support the vaccination campaign. But Congress’ work on a $908 billion COVID stimulus plan is stalled at the moment, while negotiators haggle over how best to provide economic relief to Americans, battered by COVID-related shut-downs.

In the meantime, Walgreens alone says it plans to hire about 25,000 employees, and the suburban Chicago-based drugstore chain hopes to get millions of nursing home residents inoculated by Christmas. CVS Health says it’s hoping to do the same, by hiring about 10,000 workers.

And next week, the Food and Drug Administration will consider the next vaccine, from Moderna, with a protection rate considered only slightly less effective than Pfizer’s.

Getting the message out

But getting the vaccine out to Americans is only half the battle; the other half is convincing them to take it, and polls have fluctuated since the pandemic began.

A Gallup poll conducted in late July showed about 66% of those asked said they would take the vaccine shot; by mid-September, opinion had narrowed to a 50-50 split. But in recent weeks, the number of those who say they are willing to take it has rebounded to around 58%, while 42% say they won’t.

The head of “Operation Warp Speed,” Moncef Slaoui, told CNN on Friday that he and other government officials couldn’t start convincing Americans to take the vaccine until it was approved by the FDA, and that didn’t happen until late Friday night.

Now, Slaoui says, “We have to go out there, we have to engage with the all the leadership at all levels, in our communities to help explain the features of the vaccine and its performance and hopefully engage people and convince them.”

The White House will begin a nation-wide media campaign in the coming days, as will healthcare outlets.

The study, carried out by the Centers for Disease Control and The United States Public Health Service, ran from 1932 to 1972; hundreds of impoverished Black men with latent syphilis were told they were being given free health care, when in fact, they were simply being studied. They were denied treatment with penicillin, even though the antibiotic was an available and effective treatment for syphilis by 1947. President Bill Clinton ultimately offered a national apology for the “shameful and racist” study.

Civil rights leader Rev. Al Sharpton told MSNBC on Friday that it’s “not out of ‘anywhere’ that a lot of people, particularly in the African American community, are skeptical, given history.”

But he points out that communities of color have been disproportionately affected by COVID-19, and he’s on board with the vaccine.

“Risking our lives,” Sharpton says, “is not an option, by not doing whatever we need to do to combat this virus.”

Sharpton says he’d even like to see one designated national day when Black influencers in all walks of life take the vaccine at once.

“Those with influence must use that (power),” he says, “Otherwise, you’re not worthy of the influence you have.”

Former US Presidents George W. Bush, Barack Obama and Bill Clinton have announced they’re willing to take the vaccine on camera, for the world to see. And Moncef Slaoui of “Operation Warp Speed” says he’ll do the same.

Turkey: Deadline soon for citizens in Europe to return