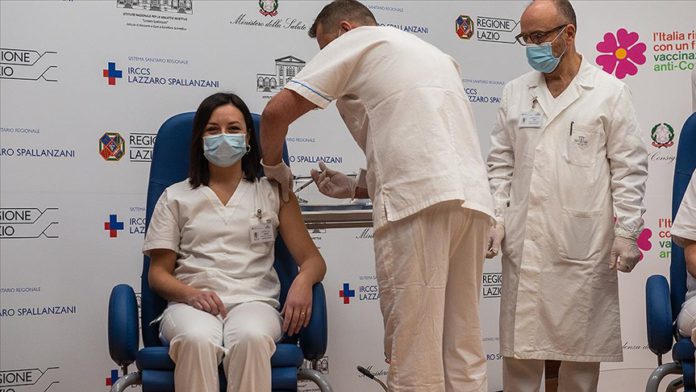 Vaccinations against the novel coronavirus pandemic started in many European countries on Sunday.

The first vaccines in France were applied to a woman and a doctor — both 78 — in Rene-Muret Hospital near the capital Paris on Saturday. On Sunday, nearly 20 more people in the Sevran and Dijon provinces will also get vaccinated.

On Saturday, 19,500 doses of the vaccine developed by German firm BioNTech in partnership with the US company Pfizer reached the country.

French President Emmanuel Macron referred to the vaccine as a “new weapon” on Twitter, though adding that they would not be obligatory.

In Austria, five pre-determined people were administered the COVID-19 vaccine at the Medical University of Vienna on Sunday.

Speaking at a press conference, Prime Minister Sebastian Kurz said the vaccinations were the starting point of the victory against COVID-19 after meeting the five citizens that were vaccinated.

The country received 10,000 doses of the Pfizer-BioNTech vaccine.

After declaring Dec. 27 as European Vaccine Day, Italy became one of the countries to start administering COVID-19 vaccines. The first shots were applied to healthcare professionals at Lazzaro Spallanzani Hospital in Rome on Sunday.

Italy bought a total of 202,5 million doses of vaccines from different firms.

The first COVID-19 vaccine in Spain was applied to a 96-year-old woman in a nursing home Sunday.

Monica Tapias, a professional at the nursing home who was also vaccinated, said: “We want the majority to get vaccinated to end this pandemic. So many people lost their lives since the beginning of the pandemic. They couldn’t make it until the vaccines.”

The Spanish government is expected to receive 4.5 million vaccine doses over three months and to vaccinate 20 million people by the summer.

In Sweden, the first person to get vaccinated for COVID-19 was a 91-year-old nursing home resident in the Mjolby province.

The first vaccination in Germany on Saturday was administered to Edith Kwoizalla, who was staying at an elderly care center in the town of Halberstadt in the German state of Saxony-Anhalt.

Vaccines are the means out of the crisis and towards progress against the pandemic, Health Minister Jens Spahn said on Twitter, adding that they were striving to deliver vaccines to all citizens.

The first vaccine in Croatia was administered to retired health worker Branka Anicic, at a nursing home in the capital Zagreb on Sunday.

Twenty more people staying in the same nursing home in Zagreb were also in line to be vaccinated.

In Slovenia, the vaccines were first given to the residents of three elderly nursing homes across the country.

Mass vaccinations will be possible at the end of March, said Health Minister State Secretary Marija Magajne, adding that 9,750 doses of the Pfizer/BioNTech vaccine had reached the country Saturday, while 16,575 doses are planned to arrive by the end of the year.

Romania distributed its vaccines to hospitals, with the first jab given to a healthcare worker in the capital Bucharest.

Meanwhile, the first COVID-19 vaccines also started to be administered in the Visegrad Group, which includes Slovakia, Czechia, Hungary and Poland.

Slovakian President Zuzana Caputova became the first person to get the shot in Slovakia.

In Czechia, Prime Minister Andrej Babis was also among the first recipients, while Poland administered their first vaccines to health workers.

In Hungary, intensive care unit workers will be the first to to be vaccinated at the initial stage.

The first vaccinations in Greece were carried out in five hospitals in the capital Athens.

President Katerina Sakellaropoulou, Prime Minister Kyriakos Mitsotakis, Parliament Speaker Konstantinos Tasoulas, a health worker in a COVID-19 intensive care unit, and an elderly resident of a nursing home were first to be vaccinated.

Also, the first shots in the Greek Cypriot administration were given to Dr. Anastasios Tsiftsis in a nursing home in Limassol, according to local media.

Vaccines will be given during the day in other nursing homes in Limassol.

* Writing by Dilan Pamuk and Faruk Zorlu in Ankara

World stood with Turkey after defeated coup of 2016