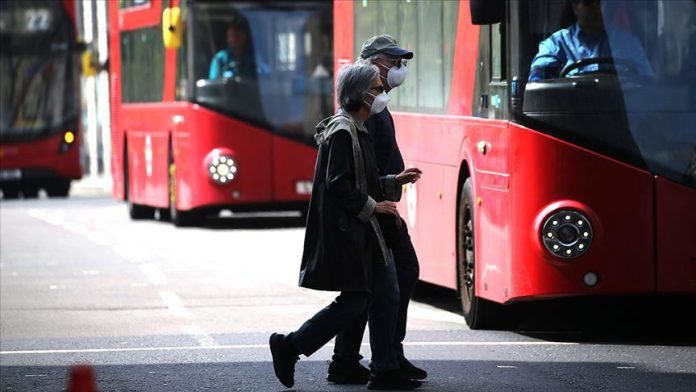 British health authorities announced on Sunday that the UK-wide death toll from coronavirus rose by 413 in 24 hours, the lowest daily rise this month.

The Department of Health reported the death toll now stands at 20,732.

More than 543,413 people were tested for the virus in the country of which 152,840 tested positive, the department said in a statement.

Meanwhile, British Prime Minister Boris Johnson will return to work on Monday, facing calls from the opposition and within his own party to explain the government’s strategy to lift the lockdown that has been in place since March 23.

A new poll for the Observer newspaper found that public confidence in the government fell over the past two weeks.

The poll found that on the key issue of testing, over half, 57%, disapproved of the way the government handled it. It also found that 63% of voters felt the government did not act fast enough to prevent the spread of coronavirus.

Nevertheless, 51% of voters still approve of the government’s overall handling of the crisis, and 49% said they have confidence in the government’s ability to handle the situation as it develops.

Both these figures declined over the past two weeks, but indicate that people are still supporting their government.

Local media also reported that over 2 million non-emergency surgery operations have been cancelled for at least three months in order to free up bed spaces for coronavirus patients.

NHS England said the postponement of these operations freed up 12,000 beds to help deal with the consequences of the outbreak.

Among the delayed operations are hip and knee replacements and cataract surgeries. But Cancer Research UK warned that the number of patients being referred to hospital for suspected cancer has fallen sharply, risking undetected cancers becoming inoperable.

President of the Royal College of Surgeons Professor Derek Alderson told a local newspaper: “The consequences are really serious. There are some patients who have cancers that are usually slow-growing but this may impact on long-term survival. A patient’s condition may deteriorate so they are no longer fit for the operation. Someone may be waiting for a hip replacement and may not be able to exercise and become even less fit for surgery. They may become addicted to opiates to manage their pain. Then there are all the mental health consequences.”

After originating in China last December, COVID-19, the disease caused by coronavirus, has spread to at least 185 countries and regions across the world. Europe and the US are currently the worst-hit regions.

The pandemic has killed more than 205,000 people, with total infections exceeding 2.92 million, while over 860,000 have recovered from the disease, according to figures compiled by the US-based Johns Hopkins University.