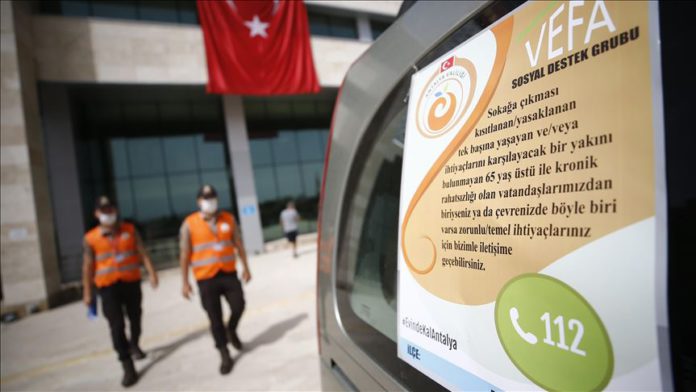 Suleyman Soylu said more than 14.5 million homes have been visited by members of the social support group to help Turks.

“Travel permission was provided to 3.6 million people, the salaries of 4.5 million people were delivered to their homes, 7.6 million people, who are over 65 or who have chronic diseases were visited and their needs have been met,” he told a journalist on a YouTube channel.

Soylu launched the Vefa Support Group to meet the needs of those who were required to stay home during the coronavirus lockdown.

Additionally, Soylu said after mosques were reopened, the government talked to the leaders of minority communities to reopen their places of worship.

Turkey on Friday partially resumed prayers in mosques, including Friday prayers, as the country began easing measures against the pandemic.

The number of patients who recovered from the disease hit 125,963 as 1,594 additional patients were discharged from hospitals in the past 24 hours, Health Minister Fahrettin Koca said Friday.

Koca said the death toll from the outbreak rose to 4,489, as Turkey reported 28 new fatalities in the last 24 hours.

Soylu said as a result of persuasion efforts by Turkish security forces and families of terrorists, the dissolution of terror groups continue.

He said 16 terrorists surrendered by persuasion since the beginning of 2020 and the number stands at 76.

Inferentially, the number of terrorists in the mountain region is 469, he said.

In its more than 30-year terror campaign against Turkey, the PKK — listed as a terrorist organization by Turkey, the U.S. and EU — has been responsible for the deaths of 40,000 people, including women, children and infants.