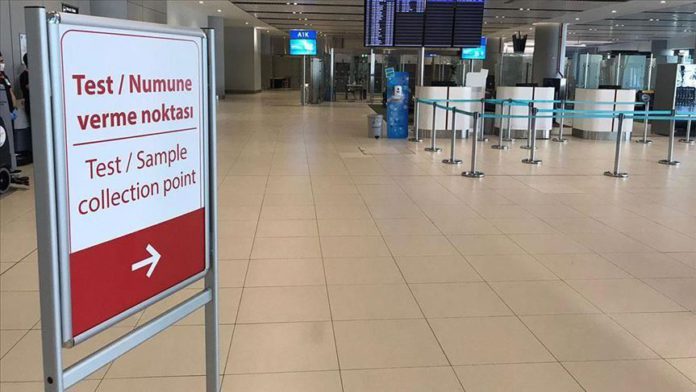 A special center for conducting coronavirus tests has been established at Istanbul Airport for passengers, the airport’s operator IGA said Wednesday.

The swab samples taken from the throat and nose of the passengers will be processed and examined in the laboratories located at the airport terminal and the results will be delivered to passengers within two hours, Fatih Mere, IGA’s operations control director, told reporters.

The passengers will have a PCR test prior to departure and after arrival.

The test results will be sent via email in Turkish and English or hard copies will be provided to the passengers who are going to travel abroad or are returning to Turkey, Mere said.

Mere also added that the center was established in line with the joint demands of the Health Ministry and the Culture and Tourism Ministry of Turkey.

He underlined that the Health Ministry fee of PCR tests was 110 Turkish liras (around $16).

“We have no profit margin here. It is a service that we offer to ensure that passengers can have their tests done and continue their flights without stress.”

Mere also said that in the first phase they tested 520 airport staff before the passengers arrived, noting that all test results turned out to be negative.

The international airport, whose first phase officially opened in October 2018, is one of the most important and largest airports in the world with around 100 million annual passenger capacity.

It is projected to serve 200 million passengers annually with full capacity after the completion of all four phases with six runways by 2028.

After originating in Wuhan, China last December, COVID-19 has spread to at least 188 countries and regions across the world, with the US, Brazil and Russia currently the worst hit.

The pandemic has killed over 512,000 people with the number of confirmed cases exceeding 10.5 million, while over 5.38 million have recovered from the disease, according to figures compiled by US-based Johns Hopkins University.

'US not pressuring Gulf states to recognize Israel’