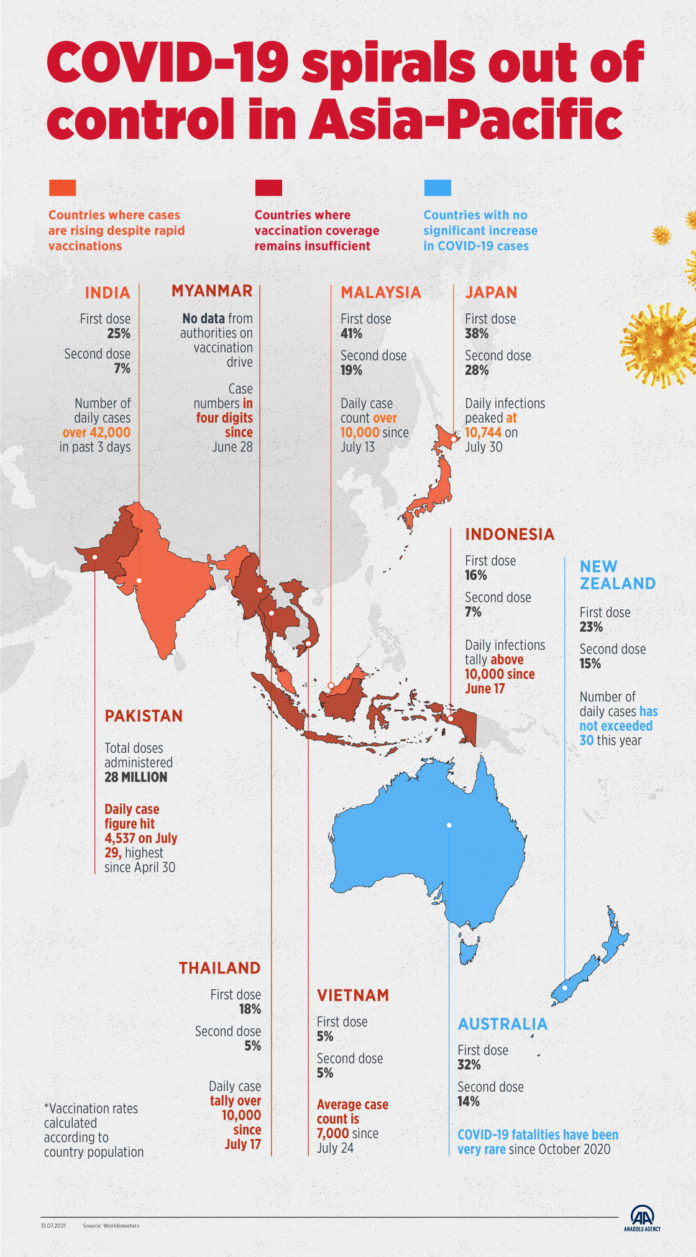 The number of daily coronavirus cases has increased in the vast majority of the Asia-Pacific region but it has become increasingly difficult to fight the pandemic in some countries.

A total of 25% of the Indian population has received a first jab, while only 7% got the second dose. The number of daily cases exceeds 42,000 in the past three weeks.

Pakistan has administered more than 28 million vaccine jabs. The daily case figure hit 4,537 on July 29, the highest since April 30.

In Malaysia, 41% of the population received the first dose while 19% got the second dose. But the high rise in cases cannot be stopped. The daily cases have been more than 10,000 since July 3.

A total of 16% of the Indonesian population has received their first jab, while only 7% got the second dose. Daily infections are above 10,000 since June 17.

In Vietnam, just 5% of the population received the first and second doses. The average case count is 7,000 since July 24.

No data is available on the vaccination drive in Myanmar. Case numbers are in the four digits since June 28.

Australia and New Zealand are among countries where cases have not increased significantly in recent weeks in the region.

In Australia, where 32% of the population received the first dose and 14% received the second dose, COVID-19-related-deaths have been rare since October 2020.

In New Zealand, 23% of the population received the first dose and 15% received the second dose, while the number of daily cases has not exceeded 30 since the beginning of the year.

In Japan, 38% of the population received the first dose and 28% received the second dose. Daily infections peaked at 10,744 on July 30.

Since December 2019, the pandemic has claimed over 4.21 million lives in 192 countries and regions, with more than 197.52 million cases reported, according to US-based Johns Hopkins University. ​​​​​​​

Myanmar set for elections amid criticism