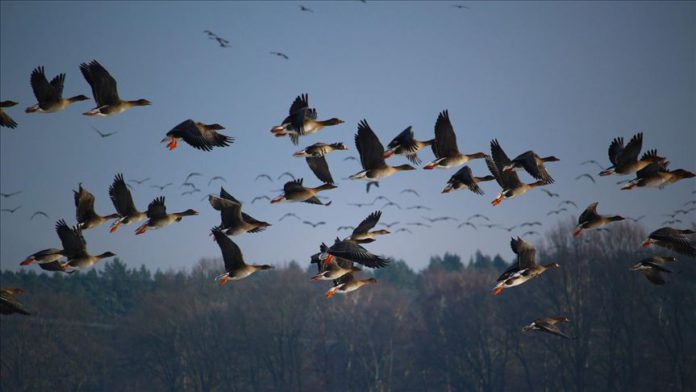 The abrupt silence caused by restrictions to stem the spread of coronavirus may have hit economies hard, leaving people jobless, but it has come as a boon for migratory birds, especially in Pakistan.

With hunters and those dealing engaging in the sale of exotic birds have been forced to stay at home, migratory birds are making hay in Pakistan’s warm waters. To avoid a stinging winter of Siberia, every year millions of birds travel large distances to stay in warm Indian waters.

But on their way back from March-April, while overflying and taking rest in Pakistan they become easy targets of hunters and bird traders.

“Thousands of migratory birds are not only hunted but also caged for sale during this period every year. The ongoing lockdown has helped them return to their homeland safely,” said Muhammad Moazzam Khan, the technical adviser of the Pakistan-chapter of World-Wide Fund for Nature (WWF).

Pakistan has been under lockdown since March and will continue until May 9 as the country has reported 22,550 confirmed cases of COVID-19, including 526 deaths so far, according to data compiled by the US-based Johns Hopkins Coronavirus Resource Centre.

“Returning to home was equally risky for the migratory birds. Thousands of them would fall prey to hunters, and poachers during migration, during their repatriation,” Khan told Anadolu Agency.

The country’s southern Sindh province, which hosts a majority of migratory birds has reported a significant decrease in hunting compared to the last year.

“The ongoing shutdown has provided relief to the overall wildlife. It has also saved thousands of migratory birds, including endangered species, which otherwise are hunted during the process of back-migration,” Javed Mahar the chief conservator of wildlife department told Anadolu Agency.

Every year over one million birds migrate from Siberia covering a grueling distance of 4,500 kilometers (2,800 miles) in search of moderate waters. Although their ultimate destination is in India, they make stopovers at various lakes and water reservoirs in Pakistan, mainly in Sindh province.

A hunting ground for Arab sheikhs

The sprawling deserts of Thar and Cholistan are the favorite hunting grounds for the Arab hunters. Some argue the hunting safaris of wealthy Arab sheikhs create jobs and help improve the local infrastructure.

Climate change and the uncontrolled hunting of several rare species have forced the migratory birds — also known as guest birds — to look for other peaceful sites in South Asia in recent years, say environmentalists.

The unchecked exercise has endangered several rare species, mainly the houbara bustard, which is constantly being hunted by Arab royals despite opposition from both environmentalists and locals.

The prolonged lockdown has also halted the illegal wildlife trade in the country, at least for now.

“Almost all the legal and illegal pet markets across the country are closed following the suspension of road, and air links, which has contained the wildlife trafficking,” Shabina Faraz, a Karachi-based expert, who frequently writes on environment and wildlife, said while speaking to Anadolu Agency.

Even the business of amateur poachers, who would cage birds like house sparrow and parrots, for the roadside sale, has dried up because of restrictions on public movement.

Many in Pakistan buy and set free these caged birds considering it an act of benevolence or to cast away evil.

Fresh lease of life to wildlife

Another species trafficked from Pakistan include freshwater and marine turtles, tortoises, raptors particularly falcons, pangolins, snakes, and other reptiles.

Karachi — the country’s most populous city, and the commercial capital — hosts the highest number of markets and shops dealing in illegal wildlife trade followed by northeastern Peshawar city, according to a WWF Pakistan survey.

“This lockdown has given a fresh lease of life to not only the wildlife but the natural habitat as well,” Khan, the WWF official observed.

After 1994 a group of Chinkara deer, also known as gazelles was spotted for the first time in the northern outskirt of Karachi late last month.

“Many other animals may move closer to the cities if the ongoing lockdown continues for some more time,”, he said.

Mahar said the Sindh government had banned trapping of birds last year, which too had contributed to the reduction in illegal wildlife trade.

Following the ban, he said the wildlife authorities had seized shipments of tens of thousands of birds and released them into their habitats in recent months.

Khan hoped that a post lockdown world would be a relatively better place for the wildlife.

“This pandemic has changed the world. There would be new SOPs [standing operating procedures] for collective social activity, including the hunting activity,” Khan opined.

“It’s hard to say some definitive at this stage but I reckon there will be different rules for hunting in the post lockdown world because of less social activities and interaction,” he contended.