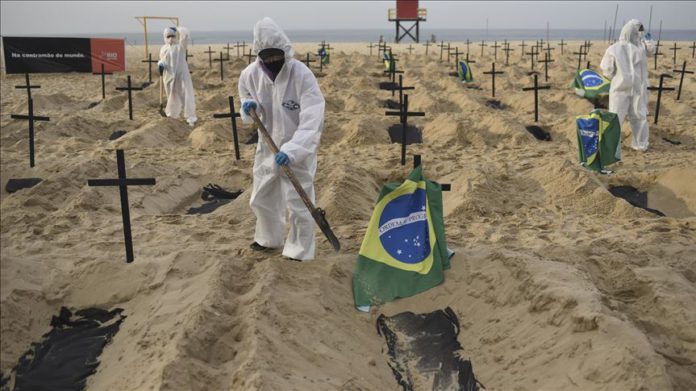 The novel coronavirus continued to make its way throughout Latin America on Thursday, with the number of cases steadily rising in nearly all countries in the region.

Uruguay and Paraguay are the exceptions. The two small countries are winning the battle against the virus, which has taken thousands of lives in neighboring countries like Brazil. Paraguay has only reported 13 deaths and Uruguay claims only 26, and they are gradually reopening their schools and businesses.

Brazil’s President Jair Bolsonaro said Thursday that he might have contracted the coronavirus previously. He said he may get tested again, although he already tested negative for the virus multiple times before.

Brazil registered 39,483 new cases Thursday, on the third consecutive day in which the number of infections totaled close to 40,000, reported health authorities, which now count a total of 1,288,114 infections.

Herrera, the most high-profile member of the cabinet to test positive for the virus, said he only had “minor” symptoms.

“I have just been informed that I tested positive for COVID-19. I have very minor symptoms. From this moment on, I will be in quarantine and will continue working from home,” Herrera wrote on his Twitter account.

Herrera was in President López Obrador’s office on Monday with Interior Minister Olga Sánchez at a meeting where new government appointments were announced.

It is not clear whether Herrera’s diagnosis will prevent Lopez Obrador from traveling to Washington next month to meet US President Donald Trump.

With more than 25,000 deaths, Mexico now has the seventh-highest death toll globally.

Peru’s President Martín Vizcarra threatened to temporarily take over the country’s private healthcare clinics if they failed to make a deal with the government over fees for treating coronavirus patients.

With hospitals collapsing since April, the number of complaints from citizens who cannot pay the very high fees of private clinics to be treated for COVID-19 has increased.

Vizcarra gave a two-day ultimatum to the clinics to accept reasonable prices, which the state sets at $461 for the treatment.

“We cannot wait indefinitely,” he said in a televised speech. “With the law and the Constitution on our side, we can do it.”

Vizcarra said he would invoke an article in the constitution that allows the government to expropriate private property for national security purposes.

Peru had more than 268,000 cases of COVID-19 and almost 9,000 fatalities as of Thursday, according to Johns Hopkins University.