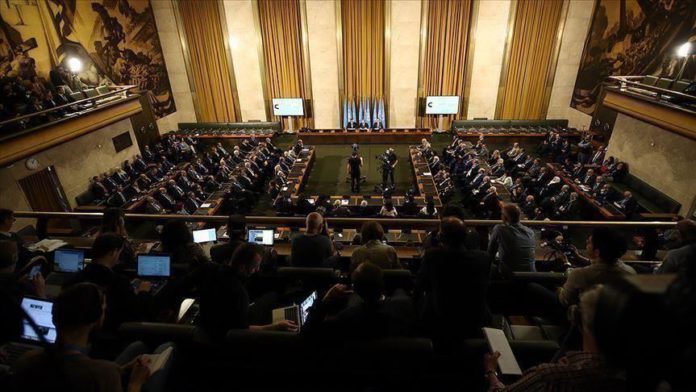 The first day of the Syrian peace talks Monday started well, according to the main opposition leader, but was halted due to three of the participants testing positive for the COVID-19 virus, the UN said.

“The office of the Special Envoy received confirmation that three members of the Syrian Constitutional Committee Small Body tested positive for COVID-19,” said the office of Syria Envoy Geir Pedersen.

It did not say which delegation among the 45 participants was found to have the virus, but opposition sources told Anadolu Agency they believed those who tested positive had come from Damascus, Syria’s capital.

The talks are “on hold,” said the UN.

“Having informed the Swiss authorities and the United Nations Office in Geneva, immediate measures have been taken consistent with protocols to mitigate any risks, and tracing of anyone who may have been in close contact with affected persons is underway,” said the UN office.

The UN said all the committee members – 15 each from three delegations – were tested before they traveled to Geneva and again on arrival.

They were wearing masks and strict social distancing measures were in place when they met at the Palais des Nations in Geneva, said the UN.

Hadi al-Bahra, former head of the Syrian National Coalition for Opposition and Revolutionary Forces, the meeting’s co-chair, left the UN in Geneva with his delegation after the first session in the morning.

“Everything started today in a positive way and started on time. Members started discussions about the core agenda of the meeting, from all sides,” al-Bahra told journalists.

He confirmed, “We were tested in Istanbul before we came here,” with none of the delegation showing signs of the virus, and they also had tests again in Switzerland showing none of his delegation was infected.

Ahmad Kuzbari, representing the Bashar al-Assad regime, was not available for comment after the talks halted.

“We are keen that we should advance the Constitution Committee work as fast as possible because we are facing real pain and misery of our people inside Syria, who are faced with COVID-19, the hardship of life, and the continuation of the conflict,” said al-Bhara.

“So, we are committed to stay here and work as long as possible. We hope the other sides can be at this level of national responsibility and agreed to stay longer and work harder to reach a resolution of the crisis.”

He said his delegation would handle the situation with Swiss Health Ministry regulations.

“I am confident that we all have learned the lesson. When it comes to confidence-building measures, obviously the fact that we will be meeting here in Geneva, after nine months, is an important step in the right direction. But as I’ve said many times, it is not enough.”