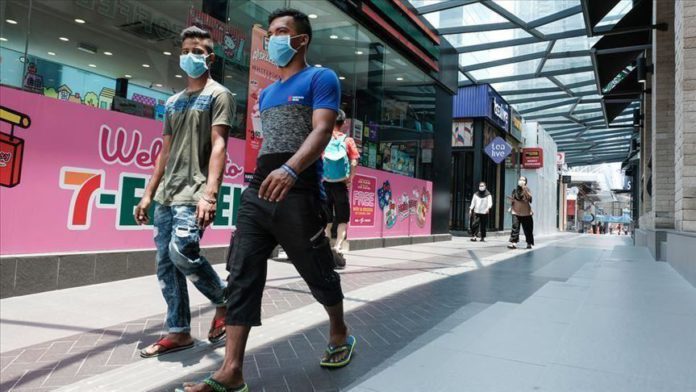 Abdullah Suady Ramadhan, 29, got to see his colleagues in Kuala Lumpur after the three months working remotely from his home in the southwestern Negeri Sembilan state due to the restrictions aimed to curb virus transmission.

“For three months, I never left the area [of my hometown] because the provincial borders were closed,” he told Anadolu Agency on Wednesday.

But the situation has changed after government reopened the inter-provincial borders as part of the RMCO policy.

Offices that have been closed for three months have now reopened.

Ramadhan said he rushed to Kuala Lumpur after the new policy was announced, and returned to work.

“The cities are now as busy as before the COVID-19 pandemic struck,” he added.

Despite being glad to be back on the move, Ramadhan said he was surprised to see heavy traffic in the morning.

He chose to ride his motorcycle to avoid traffic jams despite the rain, and it took 1.5 hours for him to arrive at Kuala Lumpur from Negeri Sembilan.

“At first, I wanted to drive my car, but the road was very packed,” he said.

As the country returned to normalcy, Ramadhan said the situation under the new policy has changed for him compared to the period before the pandemic.

“Wearing face mask has become compulsory, and I need to always carry hand sanitizer,” he added.

Ramadhan said the new work pattern was also applied in the office, where employees were not allowed to eat in the pantry due to social distancing obligation.

He added that office hours are also being shortened, to end at 5 p.m instead of 6 p.m.

Malaysians welcomed the recovery phase with joy as they are now free to travel after provincial borders are opened.

Some people went to their hometowns to see their families since they were not allowed during the Muslim festival.

“There was a joke that Eid al-Fitr seemed to be welcomed again on June 10,” he added.

Speaking to Anadolu Agency, Muhtozi, 43, who goes by only one name, said he had returned to his activity after government loosened the restrictions.

The Indonesian construction worker said he had to be tested for coronavirus before returning to work.

“It was compulsory. I could not go back to work before getting tested for COVID-19,” said Muhtozi.

He said the test result must be shown to the company before starting to work.

“If you don’t have a letter stating that the test result is negative, you can’t work,” said Muhtozi.

Body temperature check and use of mask have also become mandatory at the construction site where he works, he added.

Mass activity not yet permitted

Meanwhile, the Malaysian government has yet to allow most of the activities to resume, particularly those involving mass gatherings.

“It is very clear that such activities are still not permitted to this day,” said Sabri during a press conference.

But he said the ban would be lifted gradually.

Malaysia imposed the first phase of lockdown on March 18, and later extended it several times.

It shuttered businesses and schools, stopped people from congregating at religious and other gatherings, and also restricted travel.

From May 4, however, the country’s Prime Minister Muhyiddin Yasin softened the measures, allowing a range of businesses to reopen with strict distancing regulations.