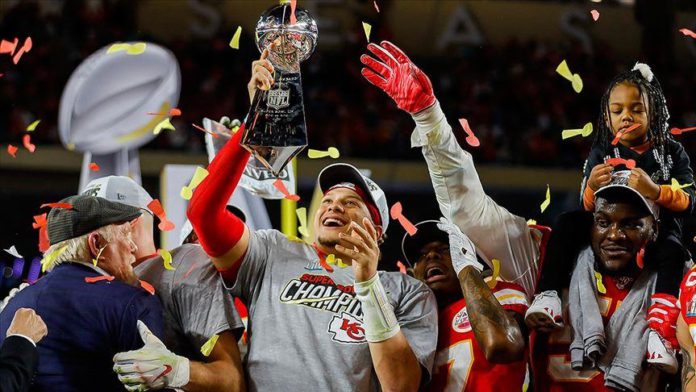 American consumers are estimated to spend $13.9 billion this year for the American football finale, Super Bowl LV, between the Tampa Bay Buccaneers and Kansas City Chiefs.

For the most-watched television event in the US every year, it is a massive 19.2% decline from the level in 2020 when consumers spent $17.2 billion — the highest ever, according to the National Retail Federation (NRF).

The dramatic decline resulted from the coronavirus pandemic-hit the US economy, which contracted 3.5% last year — the largest GDP drop since 1946.

Although the Super Bowl is a get-together event for families and friends, in 2021, it will force most people to watch it at home.

Only 28% of Americans say they will be throwing or attending a party or watching the game at a bar, which is the lowest in the NRF survey’s history.

Out of the 186.6 million who are expected to watch the game on television, 80.2 million, or 43%, say they will care for the sake of football.

The Weeknd spent $7 million for the halftime show

However, like every year, a significant portion of the viewing audience will tune in for the much-awaited halftime show and commercials.

While more than 41 million people, or 22%, indicate they will watch the game for the commercials, almost 30 million, or 16%, say they will tune in for the halftime show.

The national anthem will be a duet performed by multiple Grammy-nominated artists Jazmine Sullivan and Eric Church.

Canadian singer The Weeknd, whose real name is Abel Makkonen Tesfaye, will perform the halftime show on one of the world’s biggest music stages. Previous headliners included Lady Gaga, Prince and Michael Jackson.

The NFL usually covers expenses and production costs without paying artists who perform and gain exposure and a boost from being featured during the Super Bowl halftime show.

But Tesfaye has spent a large sum of his money on this production. The three-time Grammy winner told Billboard magazine last week he spent $7 million out of his own pocket “to make this halftime show be what he envisioned.”

“We’ve been really focusing on dialing in on the fans at home and making performances a cinematic experience, and we want to do that with the Super Bowl,” he said.

Due to COVID-19, Budweiser beer said it would not run a Super Bowl advertisement for the first time in 37 years, joining Coca-Cola and Pepsi. The latter will again sponsor the halftime show.

Budweiser said it would instead use the marketing money to support vaccine awareness and distribution efforts.

Almost 58 million doses were distributed and over 35 million doses were administered as of 6.00 a.m. EDT (1100GMT) Thursday, according to the US Centers for Disease Control and Prevention (CDC). But the number of people receiving two doses of vaccine was less than 7 million.

As for revenue from commercials, the CBS network said its advertising inventory has already sold out, noting a 30-second spot averaged $5.5 million, almost unchanged from last year’s game.

FOX reported $600 million in revenue from last year’s Super Bowl, which included all commercials before, during and after the game.

Broadcasting of the big game rotates between CBS, FOX and NBC.

The Super Bowl is never without beverage and food, especially chicken wings.

The US’ National Chicken Council expects a record of 1.42 billion wings consumed during the game, up 2% from last year, which could circle the Earth’s circumference three times.

Council spokesman Tom Super said restaurants like wing joints and pizza places did not have to change their business model during the pandemic since they were built around takeout and delivery.

“Wings travel well and hold up during delivery conditions. Plus, they align with consumer desire for comfort food during the pandemic. Chicken production remained steady in 2020,” he said.

According to the statement, wing retail sales totaled almost $3 billion in the US during the pandemic, up 10.3% from a year ago, while in-store frozen wings soared 37.2%.

Stadium to have one-third attendance

The National Football League took strict measures for team players, staff, and personnel this season that saw games rescheduled with a reduced number of fans present in stadiums because of the coronavirus pandemic.

Super Bowl LV will be the first time that one of the teams will host the game on its home field.

14,500 fans purchased tickets, in addition to 7,500 vaccinated health care workers, the NFL invited, which will bring attendance to 22,000.
Airbnb said it would designate a specialized customer service team to support hosts and guests in the Tampa Bay area.

The online vacation rental marketplace also banned parties in the interest of public health due to the virus, putting a maximum occupancy limit of 16 people per rental and created a hotline for potential problems.

According to Johns Hopkins University data, Florida is the fourth-largest US state with 27,247 deaths from the virus as of Friday.

More than 455,000 people lost their lives in the US since the beginning of the pandemic among total cases above 26.6 million, the data showed.