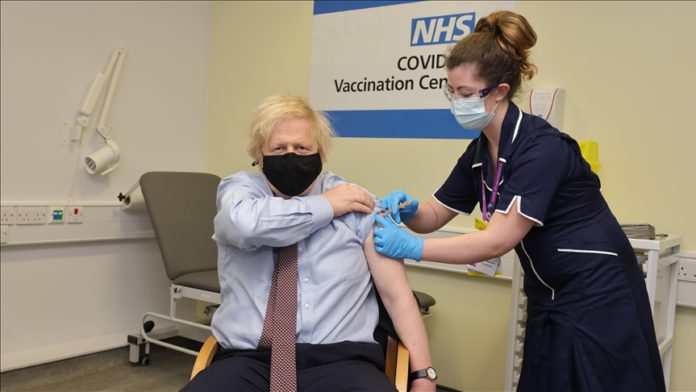 The UK on Saturday reached another milestone in its fight against the novel coronavirus pandemic, having administered at least one vaccine dose to more than half of its adult population.

According to data published by the government on Thursday, 49.9% of people aged 18 and over had been administered with the first dose of a vaccine. Friday recorded 660,276 doses across more than 1,600 sites, the largest daily figure recorded since January.

“Like the rest of the country I am immensely proud of the progress we have made so far in rolling out vaccinations. There is still further to go and I encourage everyone to take up the offer when asked to do so,” Prime Minister Boris Johnson said in a statement.

“I received my first vaccine yesterday and would like to thank the brilliant NHS staff I met, alongside the teams and volunteers working across the UK to deliver this vital protection,” he added.

By the end of Friday, over 26.85 million people had received the first dose of a vaccine, with 2,132,551 having received the second. Vaccines are currently administered in two doses 21 days apart.

“I’m absolutely delighted to tell you that we have now vaccinated half of all adults in the UK,” Health secretary Matt Hancock said in a video posted on Twitter.

“It’s a huge success and I want to say many, many thanks to all those involved, including the half of all adults who have come forward. The UK vaccination program is a big success story. It’s down to the hard work of many, many people,” he added.

On Saturday, 5,587 people were confirmed to have contracted the virus, raising this week’s total to 37,451. This represents an 7.5% decrease in comparison to the last seven days.

Health officials reported 96 deaths within 28 days of testing positive for the virus on Friday. This figure was 659 between March 14 and March 20, showing a 36.9% decrease in comparison to the previous week.

The UK R value increased slightly and now stands at 0.6 – 0.9. The growth rate, however, saw a small drop and is currently at minus 6% to minus 3%. The R-value shows how many healthy people will be infected by a sick person, with a rate above one indicating that the pandemic is growing.