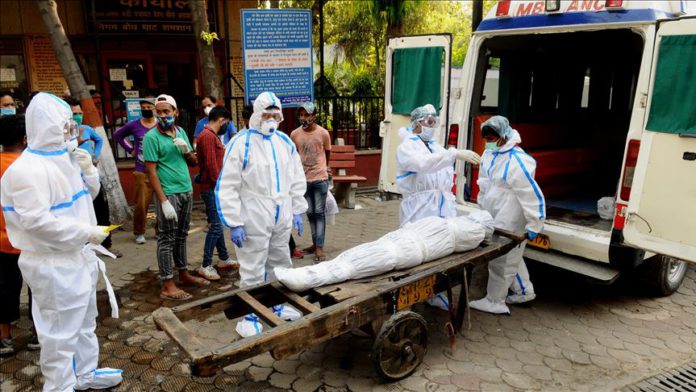 The death toll in India due to the novel coronavirus exceeded 9,500 as of Monday morning, with 11,502 more infections and 325 fatalities in the last 24 hours, according to official figures.

Data by India’s Ministry of Health and Family Welfare indicated that the country had passed the 11,000-mark in daily cases for the third day in a row as total infections hit 332,424 and the overall death toll reached 9,520 in the world’s second-most populous country.

Among the total cases, 153,106 were active, while 169,798 were reported to have either recovered or left the country.

This is the tenth consecutive day that India has reported more than 9,000 COVID-19 cases with a record number of new patients each day.

Delhi is the third worst-hit state in India after Maharashtra and Tamil Nadu.

Last week, cases in India surpassed those in the UK to become the fourth worst-hit country in the world behind the US, Brazil and Russia, according to figures compiled by the US-based Johns Hopkins University.

The western state of Maharashtra continues to be the epicenter of the outbreak in India, with the state’s death toll at 3,950 while the total number of patients has skyrocketed to 107,958, including 53,030 active cases.

The government said the virus infection has not entered the community transmission stage as the lockdown and containment measures have prevented a rapid spread.

The pandemic has killed over 433,000 people worldwide, with more than 7.9 million confirmed cases, while recoveries have approach 3.8 million, according to Johns Hopkins University.

Turkey has given over 105.6M coronavirus vaccine jabs to date