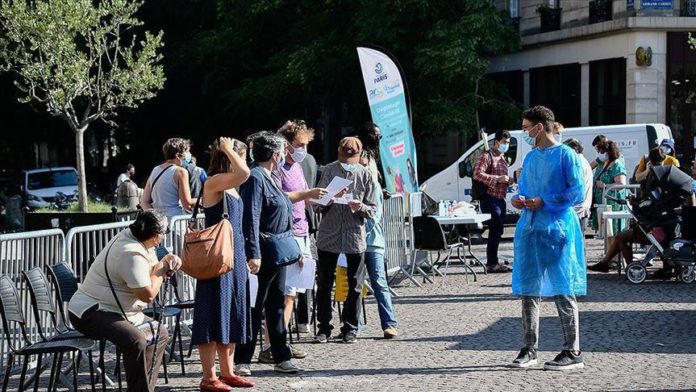 Amid wrangling over new restrictions against the novel coronavirus, France reported yet another spike in daily cases of the disease.

With 66 departments declared to be in a state of vulnerability, 1,234 active clusters of infection have been identified in France.

The rise in cases over the week hit a record 70,458. New hospitalizations have been registered at 6,500 in just the past three-and-a-half days.

Veran did not rule out putting the Ile-de-France — Paris and its surrounding suburbs — on maximum alert starting Monday if the situation continued to slide downward. Doing so would mean a drastic reduction in social interaction, he said, with family celebrations — a staple of French life — prohibited.

“Paris and its suburbs have crossed the three thresholds which correspond to the maximum alert zone. We will review the data on Sunday,” Veran detailed, adding that introducing the maximum alert level — the highest of three levels recently established by the Health Ministry on the virus’s risk — would be inevitable.

In his first weekly address last Wednesday, Veran announced the closure of all restaurants, cafes, and bars in the Aix-Marseille region. The shuttering started Monday and is set to continue for two weeks.

The decision to impose restrictions prompted protests in Marseille the next day, and the outcry has not stopped since.

This week, Finance Minister Bruno Le Maire introduced aid packages of €1,500 ($1,756) to €10,000 ($11,709) per month to establishments forced to close, along with full unemployment coverage for each employee through the end of the year.

Fellow mayors also criticized the move, especially since none were informed ahead of time.

“The government must be more coherent in its message,” said Grenoble Mayor Eric Piolle, stressing that officials needed to be more efficient in their delivery of data and application of results to separate regions and municipalities.

The restrictions also prompted Prime Minister Jean Castex to hold in-person meetings Thursday at the Matignon, his official residence, in the capital with the mayors of Paris, Grenoble, Marseille, Lyon, Lille, and Toulouse, reassuring them that no new restrictions would be put in place during the period of closure.

In support of his culinary compatriots, Michelin-starred chef Philippe Etchebest called on his industry colleagues to strike Friday morning, Oct. 2. He has already announced that he would sport a black armband in protest.

Etchebest urged restaurateurs to do the same, to stand “in front of our establishments, with a black armband on, performing a concert of casseroles for a minute. [This will] alert the public authorities to the fragility of our profession today and the jobs of our employees,” he said. The star chef owns and runs Le Quatrieme Mur in Bordeaux.

The chef asked suppliers and producers to join in protest as well, citing the threat to related industries.

Since emanating in China in late December 2019, the coronavirus has spread worldwide, claiming over 1.02 million lives in 188 countries and causing more than 34.33 million infections, according to the latest figures from the US-based Johns Hopkins University.