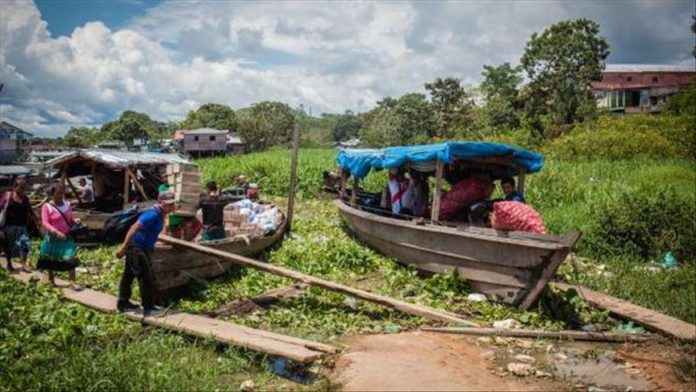 While deforestation in the Amazon rainforests continues, the lives of indigenous people are at greater risk as the mortality rate from the coronavirus is already double that of Brazil’s population.

On World Rainforest Day, celebrated annually on June 22 to raise awareness and encourage action to protect rainforests, Christian Poirier, program director for Amazon Watch, told Anadolu Agency that indigenous people in Brazil are dying at an alarming rate from the virus.

“The mortality rate is double that of the rest of Brazil’s population […] more than 2,640 officially confirmed cases of coronavirus and at least 252 deaths, which suggests a mortality rate of 9,6% — compared to the national rate of 5.6%,” he said, citing data as of June 9 from the Articulation of Indigenous Peoples of Brazil (APIB).

The situation among indigenous people is also being exacerbated due to the lack of access to decent medical care as the average distance between settlements and the nearest intensive care units (ICU) being 315 kilometers (196 miles) away, he said, highlighting a study conducted by the non-profit InfoAmazonia. Ten percent of villages are 700 kilometers to 1,079 kilometers (434 miles to 670 miles) from an ICU.

“Most of the COVID-19 deaths in indigenous people have occurred in Amazonas, one of the states with the highest infection rates,” he said, stressing that the region’s health system had collapsed in March, as local officials had warned.

Poirier said the National Indian Foundation, the governmental body responsible for mapping out and protecting lands of indigenous people, is hardly doing anything to coordinate a response to the crisis, although people urged the government and the World Health Organization to improve local health care.

Indigenous people are facing the consequences of the government’s attitude towards the virus.

“There’s not enough protective equipment for agents who enter indigenous territories or meet with native people in cities. Necessities like kerosene and gasoline are in short supply,” he added.

Food deliveries began only at the beginning of the June, a month after indigenous people were instructed to remain in villages that were vulnerable to the spread of the pandemic because they lack adequate access to health care.

As of Sunday, Brazil registered 49,976 deaths from the virus with over 560,000 recoveries. Currently, there are more than 1 million confirmed cases in the country.

‘We haven’t had many choices’

“Our communities are often in remote, inhospitable regions without access or infrastructure. In the face of the pandemic we haven’t had many choices,” said Tuxa, who is a member of the Tuxa people in northeastern Brazil.

Tuxa have isolated themselves. No one is allowed in and they try to keep anyone from going out, he said.

There is “enormous need” for medicine and Amazon Watch, which advances the rights of indigenous people in the Amazon Basin, helps to provide modest support for indigenous partners whose population contracted the COVID-19.

Tuxa claimed that the cure for a future outbreak could be in their lands. “Large pharmaceutical companies come into our communities, extract our traditional knowledge and plants without recognizing our rights and take them to the cities and say they’re their own discoveries,” he said, referring to the traditional knowledge of indigenous communities.

For thousands of years, the Amazon has been home to at least 400 distinct indigenous peoples from eight South American nations whose lives are intrinsically connected to the land and water for daily and cultural survival.

In addition to the pandemic, deforestation is still a huge risk for the Amazon as illegal miners advance on areas of isolated indigenous communities.

“Illegal miners and loggers, emboldened by [President Jair] Bolsonaro’s promise to open up the Amazon for business, now pose an even greater threat to remote communities, increasing their vulnerability to violence and infection by illegal extraction gangs as the pandemic rages,” Poirier said.

Environment Minister Ricardo Salles urged the government to push for further deregulation of environmental policy while people are distracted by the COVID-19 pandemic, he said. It is an example of a policy that uses the crisis to take advantage, he said.

“In the first four months of 2020, Brazilian Amazon deforestation was up 55% from a year ago to 1,202 square kilometers [464 square miles] […] in the same period, deforestation within indigenous territories skyrocketed, increasing by 59% compared to the same period last year,” he said, citing data from Brazil’s National Space Research Institute (INPE).

Fires could be 50% worse this year than last year, according to the Amazon Environmental Research Institute (IPAM), as low rainfall forecasts between May and October is expected to cause suitable conditions for wildfires.

Poirier urged supporters to join Amazon Watch’s “call for a moratorium on the invasion and destruction of Amazonian indigenous lands.”

The Amazon is home to one-third of plants and animal species in the world and generates 20% of flowing fresh-water. It produces 20% of the earth’s oxygen, and as a vast carbon sink, absorbs more than 1 billion tons of atmospheric carbon which is emitted by the burning of fossil fuels annually.