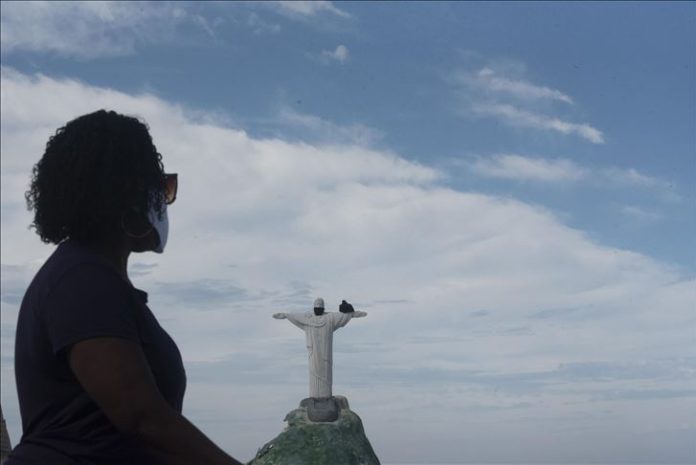 With more than 2.1 million COVID-19 cases, Brazil remains the second worst-affected country in the world, while Peru, Mexico and Chile are trailing behind, according to figures compiled by the US’ Johns Hopkins University.

Brazil’s President Jair Bolsonaro, who announced a few days ago that he tested positive for coronavirus, came within a few meters together with hundreds of his followers in the garden of the presidential residence on Sunday.

Bolsonaro walked across the lawn where he greeted his followers, who spent several hours outside the palace at a vigil called by evangelical leaders to pray for his health.

“Let’s walk with the pandemic, we are going to overcome this. We have an excellent team of ministers, mainly the minister of health, and everything is happening so that we can quickly build the future of Brazil,” said Bolsonaro without a mask on.

Cases and deaths have continued to spike in Mexico. According to health authorities, there have been 349,396 cases and 39,485 fatalities from the virus as of Monday. Figures led experts to conclude that the country could exceed the UK’s death toll by the end of the month.

Meanwhile, in the midst of the health crisis, political frictions with the neighboring US arose. In an interview with Fox News, President Donald Trump accused Mexico of not helping the US with the pandemic and expressed content that the construction of the wall is well underway.

Mexican President Andres Manuel Lopez Obrador said that the electoral campaign is about to begin in the US and that Trump’s comment should be understood in that context.

Although the number of cases is still rising, some of Mexico’s 32 states have begun to reopen sectors of the economy according to a stoplight system. States under a “red light” must continue with strict confinement measures and closures of many non-essential businesses. States under an “orange light” are allowed to reopen with some restrictions.

“These five weeks of improvement allow us today to begin a new stage and look to the future with greater hope,” he said.

On Monday, Venezuela returned to a strict quarantine across the country.

It was announced by President Nicolas Maduro who said on Twitter that this week “the seven days of radical quarantine will begin throughout the national territory” in an attempt to curb the spread of coronavirus that has caused 11,891 infections and 112 deaths in the country.

Only essential sectors of food and health will be operating.

Venezuela is implementing a 7-7 system that consists of observing seven days of strict quarantine and seven days of flexibilization.