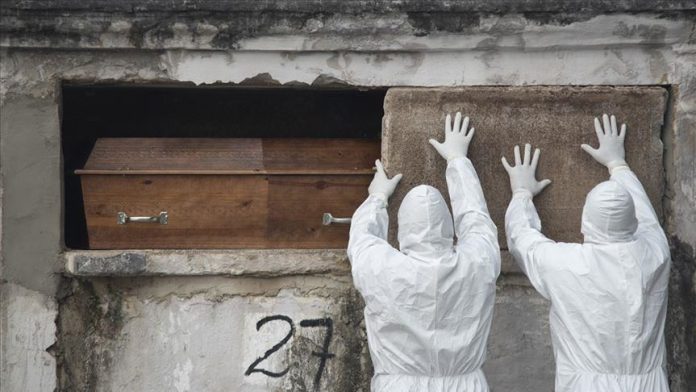 Coronavirus cases topped 170,000 in Latin America and the Caribbean and caused the death of more than 8,000 people in the region, according to data from the US-based Johns Hopkins University in Maryland as of Monday.

COVID-19 so far claimed the lives of more than 200,000 people worldwide and the number of confirmed cases now exceeds 3 million in 185 countries and regions across the world.

With a population of 210 million, Brazil is the worst-hit nation in Latin America. Peru is the second country with more confirmed cases of coronavirus. Last week, authorities from Ecuador processed thousands of tests that had not been dealt with due to lack of capacity, thus doubling the number of cases.

While the country faces the pandemic, the government is immersed in a political crisis following the resignation of Justice Minister Sergio Moro, who has accused president Jair Bolsonaro of interfering in the investigations of the judicial power.

The political storm involving Brazil’s far-right president was prompted on Friday when Moro resigned and publicly accused the president of attempting to interfere in federal police investigations involving his sons.

The departure of Moro, who has become one of the symbols of Brazil’s fight against corruption, came days after former Health Minister Luiz Henrique Mandetta was dismissed by Bolsonaro after having disagreements on how to handle the pandemic, which leaves 63,328 confirmed cases and 4,298 deaths to date.

Mandetta stood up as a strong promoter of social isolation to fight the virus, while the head of state defends the return to work of Brazilians to keep the economy afloat.

The South American country has recorded over 22,719 COVID-19 infections and almost 576 deaths.

However, official statistics from Ecuador are widely viewed as an extreme undercount in a country where testing has been very limited.

The country of 17.6 million is the eighth most populous nation in Latin America, yet it stands second only to Brazil in the number of infections and COVID-19 deaths in the region.

However, after seven weeks of coronavirus lockdown, Ecuador will gradually ease restrictions starting on May 4, with color-coded cities according to the risk level, president Lenin Moreno informed.

Red areas will remain under shutdown orders and yellow and green regions will see transport restrictions partially lifted, curfew hours scaled back, up to 70 percent of employees allowed to return to work, and some sectors reopened.

“At the slightest indication of the virus re-emerging, the initial situation of isolation and curfew will return,” cautioned Moreno on Sunday.

Colombia is preparing to relax its quarantine, with a gradual return to productive activities in the construction and manufacturing sectors, a government measure some local leaders including Bogota mayor Claudia Lopez have described as “risky for the lives of citizens.”

Given the increase in homicides in El Salvador in recent days, the country’s president Nayib Bukele authorized security forces to use “lethal force” to fight gangs suspected of committing murders in the Central American nation.

At least 40 people have been killed between Friday and Sunday in El Salvador, according to local media reports.

“The maras (gangs) are taking advantage of the fact that almost all of our law enforcement is controlling the pandemic. We will have to move resources to combat them,” the president published on his Twitter account on Sunday.

As of Monday, the country had 323 confirmed cases of the coronavirus and 8 deaths.

While the world stops all activities to combat the coronavirus, Nicaragua held a boxing match on Saturday, defying the deadly impact of the pandemic.

Although the promoter of the event offered free tickets, only 10% to 15% of the Alexis Arguello gymnasium that has a capacity of 8,000 people, was occupied.

Daniel Ortega’s government has not implemented social distancing measures to stop the spread of the virus and is one of the few nations on the planet where sporting activities, including soccer and baseball, have not been suspended.

Nicaragua has reported 13 cases and 8 deaths.

Mexico, Dominican Republic and Panama are the most affected countries in Central America.

With nearly 1,351 fatalities, Mexico has recorded the highest deaths in the region. It has 14,677 total cases.

The Dominican Republic has 282 fatalities in over 6,293 cases.

In Panama, cases and deaths are standing at 5,779 and 165 respectively.