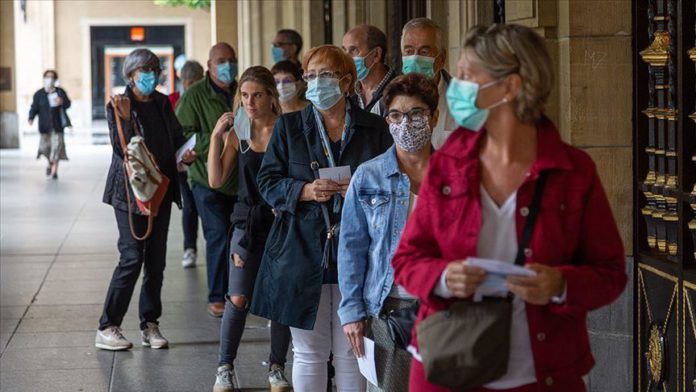 Although Spain has the fifth-largest population in the European Union, it has by far the most confirmed COVID-19 cases, reporting nearly 80,000 more cases than the UK, which is the second-worst affected.

More than 78,000 people have tested positive for the disease in Spain over the last two weeks, according to the Health Ministry.

Since Friday, the number of COVID-19 patients currently in hospitals rose by 781 to top 5,400. During the same period, 34 more people died, according to the ministry.

Madrid continues to suffer from one of the worst outbreaks in Europe. Residents of some of its worst coronavirus-hit neighborhoods have been asked to stay home but it still has some of the most relaxed measures in the country after a local court overruled the ban on nightclubs and smoking in crowded public spaces.

Catalonia also saw a worrying uptick in cases on Monday, after being one of the first Spanish regions to see cases surge this summer. On Monday, local officials limited gathering to a maximum of 10 people.

Catalan President Quim Torra said 70% of contagions in the region are occurring in social gatherings with friends of families.

August is the holiday season in Spain, and social interactions have likely increased significantly this month. Yet, September will bring its own challenges as millions of students and workers are set to return to classrooms and offices.

What the school year will look like remains a mystery to most students, parents, and teachers, but a government meeting on the topic has been scheduled for Thursday.

The southern region of Murcia likewise moved to limit most social gatherings to a maximum of six people on Monday. Weddings and funerals will only be allowed to have a maximum of 30 people.