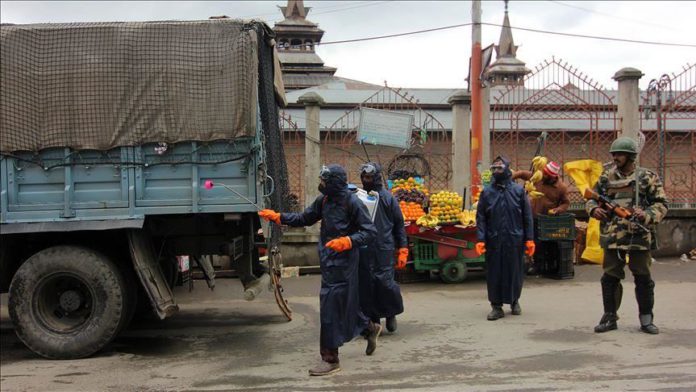 The Indian-administered Jammu and Kashmir region on Monday crossed 14,000 COVID-19 cases after 751 new cases were seen, the highest single-day spike so far.

The government said the 751 fresh cases took the tally to date in the region to 14,650, while 10 more deaths were recorded, bringing the total fatalities to 254.

The government data said that this month, almost 7,000 fresh cases have been reported while 154 people have died from the deadly virus.

The regional administration last week imposed a lockdown following the surge in infections, while the local doctors body said the virus transmission is now within the community.

In a statement, the Doctors Association of Kashmir warned people about community transmission of the virus, saying that more than 90% of the local population is susceptible to the infection.

Amid the pandemic crisis, the regional government has allowed tourists and non-local laborers in the region and is also set to allow a Hindu pilgrimage by the end of this month.

Educational institutions and public transport are still suspended in the region, while some business establishments have reopened.

As the pandemic crisis continues, violence over the disputed region has not ebbed. Over 130 militants have also been killed during the current year in over 40 gunfights.