TurkishPress
Home News COVID-19 cases below 7,000 in Russia for 5th day in row 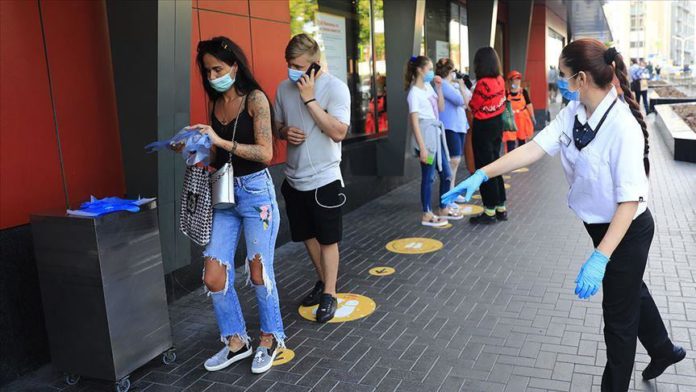 The daily growth in coronavirus cases in Russia stayed below 7,000 for a fifth day in a row while recoveries are rising, resulting in a falling share of active cases, according to official figures.

On Tuesday another 6,693 coronavirus cases were confirmed in the country, bringing the country’s tally to 647,849, with active cases accounting for about a third of the total number, the country’s emergency task force said in a daily report.

Over the same period 9,220 patients were discharged from hospitals, pushing recoveries up to 412,650.

Russian Prime Minister Mikhail Mishustin said that although the number of new cases is declining across the country, the government will continue to increase the number of tests, because it helps “identify new cases quickly, helping the patients and preventing them from infecting those around them.”

Russia allocated nearly 3.5 billion rubles ($500 million) from the government’s reserve fund for the production of COVID-19 test kits for use at federal and municipal establishments, Mishustin added.

Over the last two weeks Russia has seen more recoveries than new cases while the incidence rate dropped 10%.

In June, most of the lockdown measures were eased throughout the country, including the capital Moscow.

Trials for several vaccines have started and authorities have so far approved two medications for treatment of the virus.

Since originating in China last December, the pandemic has claimed over 505,500 lives in 188 countries and regions.

More than 10.3 million cases have been reported worldwide, while over 5.23 million patients have recovered so far, according to figures compiled by the US’ Johns Hopkins University.