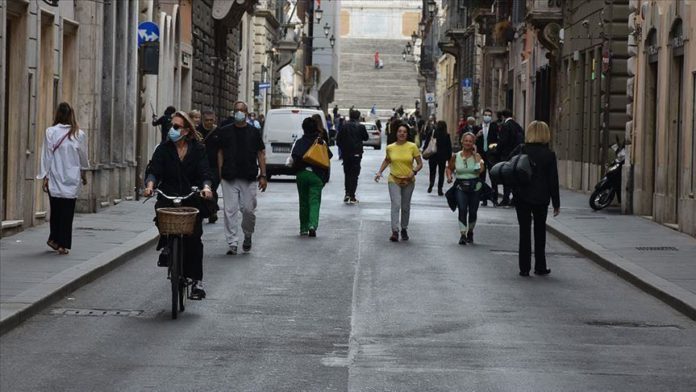 Novel coronavirus cases are on the rise in Europe again, almost jumping back to the figures recorded in mid-March, when the spread of the disease peaked across the continent.

The situation varied from country to country during the summer but was generally under control due to strict measures. However, August has seen a resurgence in the number of virus cases throughout Europe.

Andrea Ammon, director of the European Center for Disease Prevention and Control (ECDC), warned authorities on the climbing pandemic in Europe, saying the situation had almost returned to the mid-March level.

The number of cases across Europe started to rise in mid-March, and peaked at the end of the month and early April.

Anadolu Agency correspondents compiled a country-by-country report in Europe on the coronavirus pandemic.

Spain is one of the hardest-hit European countries by the pandemic, with a total of 488,513 cases. The country has recorded 8,959 new coronavirus cases in just 24 hours.

Almost half of the confirmed new cases were in the capital Madrid and the autonomous Catalonia, while the Basque, Aragon, Canary Islands and Andalusia regions also announced rapid increases in virus cases.

Health Ministry officials emphasized that COVID-19 patients were filling only 6% of the total bed capacity in hospitals, saying the pandemic was under control and there was no need for alarm for now. Over 20% of emergency services were related to COVID-19 patients, it was stated.

Many countries in Europe advised their citizens against traveling to Spain, while also requiring PCR tests and a 14-day quarantine for those arriving from the country.

Wearing face masks for everyone above the age of six and maintaining social distance is mandatory throughout the country, where 29,234 people have lost their lives due to COVID-19.

The country also took additional measures, such as banning smoking in open areas where social distance is not guaranteed, closing discos and bars, banning gatherings of more than 10 people and encouraging remote working.

France has recently seen a significant increase in the number of daily cases after summer vacation. On Sept. 2, officials recorder 7,017 COVID-19 cases throughout the country, jumping from 556 on Aug. 3.

France has become the second country — after Spain — where daily cases increased the most. Precautions have been expanded after the recent jump in the virus cases, with about 21 regions, including Paris, declared a red zone.

Wearing face masks is mandatory in the capital, as well as many other cities.

The UK has also seen a rise in virus cases over the last 25 days after daily infections were limited below 1,000 between June 27 and Aug. 8. The average daily cases recorded between Aug. 8 and Sept. 3 was 1,300.

Over 1,735 new cases were reporded in the last 24 hours, the highest daily figure since June 4 when 1,805 cases were reported. A total of 340,411 people are infected with the coronavirus in the country so far, while 41,527 have lost their lives.

Young people and vacationers caused a surge in daily virus cases in Italy, the country most affected by the pandemic in Europe. The daily cases were under control during the summer, but August saw a significant increase.

Officials said there was no need for concern, but warned young people to be careful.

Germany: Cases on the rise

The Robert Koch Institute (RKI) announced that total coronavirus cases were approaching 250,000, with over 9,000 deaths. The German government also declared some regions in EU countries “risky” for COVID-19. Those returning from risky areas have to go into 14 days of quarantine if they do not have a “negative” test result. The government urged people not to “travel to risky regions.”

Those not wearing masks are subject to a €50 ($59) fine in the country, while the government has banned large-scale events like festivals where the risk of infection is high.

Croatia also saw a record increase in the number of daily cases Thursday, with 369 new cases. This was the highest since Aug. 10, when there were 45 daily cases.

Authorities cited the density of holiday regions as the main reason for the increase. Several EU countries, including Italy, have added the nation to the list of “unsafe countries.”

Unlike most countries in Europe, daily cases have been falling Belgium has seen a decline for about two weeks.

According to the statistics of the National Institute of Health, the number of people infected with the virus in the week of Aug. 24-30 decreased by 11% compared to the previous week with a daily average of 440. Over 420 new cases were recorded in the country in the last 24 hours.

In Switzerland, the number of daily coronavirus cases climbed after the state of emergency in the country was lifted.

According to the data by the Federal Health Office, total coronavirus cases were 43,127, while the death toll reached 1,729. Over 364 cases were detected in the last 24 hours in Switzerland, while three people lost their lives.

Portugal stands out as one of the countries least affected by the outbreak in Europe so far. The country has recorded 1,829 deaths and 59,051 infections so far. The majority of new cases are seen around the capital Lisbon.

The number of average daily cases in the country has been above 300 for the last 19 days.

The country has seen an increase in COVID-19 cases after opening its borders to some countries as the tourism season began.

In Malta, the number of daily cases exceeded the figures in the March-April period, when the pandemic peaked in many European countries.