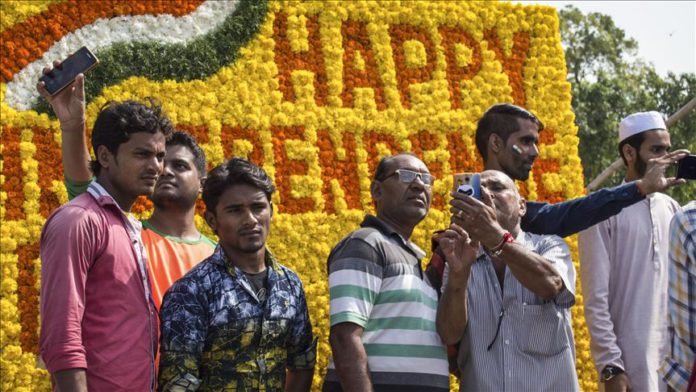 From pulling in military bands to thank coronavirus frontliners to isolating police personnel for the I-day guard of honor duties, the authorities have ensured special measures in lieu of the coronavirus spread.

On July 24, the Indian Ministry of Home Affairs released guidelines asking all states to celebrate Independence Day this year “in a manner befitting the occasion”.

In a first, the Home Ministry also recommended that the COVID-19 warriors including doctors, health workers and sanitization workers be invited to the celebrations, as a recognition of their noble service in the fight against the disease.

As a break from tradition, school children are not participating in the event this year.

As part of Independence Day celebrations, military bands from the Indian tri-services (army, navy, and airforce) are holding band performances across the country for a fortnight from Aug. 1 onwards.

“Places of significance to India’s independence movement has been selected as venues for these Band Concerts,” confirmed the Defense Ministry spokesperson.

Between Aug.1 and 13, the bands performed in all major cities in the country, including the national capital Delhi and financial capital Mumbai. The performances also took place at the iconic Red Fort and India Gate in Delhi.

The hour-long performances, at each site, featured a wide selection of music ranging from martial, English pop music to some songs of patriotic fervor.

“The first time performances are being held as a gesture of gratitude and appreciation of the nation towards corona warriors who have been battling to contain the spread of coronavirus even at the peril of their own health,” told Commander Vivek Madhwal, Navy spokesperson.

Over 350 police personnel who constituted the guard of honor duties on Independence Day have been kept under isolation. These personnel range from constables to deputy commissioner of police.

Talking to Anadolu Agency, Robin Hibu, special commissioner of the armed police, confirmed that the personnel is being closely monitored for the safety of all attendees on Aug. 15.

“The personnel are in complete isolation and are not being allowed to come in contact with any outsider to avoid contracting COVID-19. Their temperatures are being monitored every day,” told Hibu.

He further added that owing to the risky environment police officers work in, they are at an increased risk of contracting viruses. Thus, it was important to quarantine them for the special day which was attended by the Prime Minister Narendra Modi and other senior dignitaries.

Indian flag to be hoisted at Times Square

In a first, an Indian flag was hoisted at the Times Square in New York on Independence Day, which had been confirmed by the Federation of Indian Associations (FIA) of the tri-state area of New York, New Jersey and Connecticut.

“The FIA will be creating history on Aug. 15, 2020, by hosting the first-ever flag hoisting ceremony at Times Square to commemorate India’s Independence Day. It will be the first time ever that India’s tricolor will be unfurled at the iconic venue in all its glory,” it had said in a statement.

The celebrations include hoisting ceremony and the annual tradition of illuminating the Empire State Building in hues of the tricolor — saffron, white and green, on the eve of I-day.

Modi to focus on self-reliant India

Recently, Indian Defence Minister Rajnath Singh confirmed that PM Modi would present a new outline for a self-reliant India in his Independence Day speech on Aug. 15 at the Red Fort in Delhi.

While announcing import embargo on 101 items, Singh also confirmed that all departments and ministries are working on implementing Modi’s vision for a “self-reliant” India.

The Ministry of Home Affairs guidelines also stated that the message of “Atmanirbhar Bharat” (self-reliant India) is suitable spread and publicized among the masses through messages in the function and on social media.