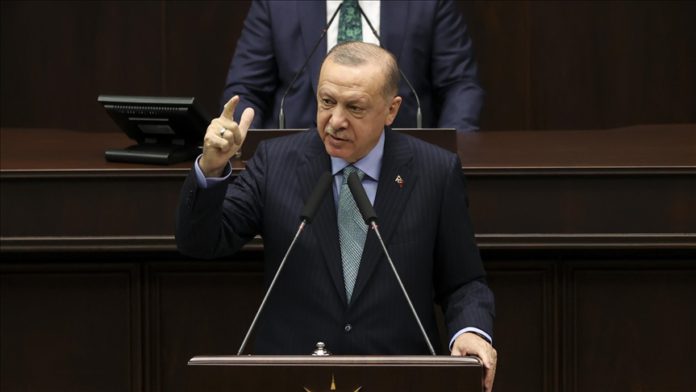 All countries should back Turkey’s justified fight against terrorism, the nation’s president urged on Wednesday.

“We call on everyone who has principles and honor to back Turkey’s legitimate fight and approach” on terrorism, Recep Tayyip Erdogan told his Justice and Development (AK) Party’s parliamentary group in the capital Ankara.

But countries who qualify this fight with words such as “but” or “however” are making “a critical mistake,” he added.

Turkey’s counter-terror operations within and across its borders are the country’s legitimate right as well as “humanitarian missions,” Erdogan explained.

Turkey, like every state in the world, has the right to bring the fight against terrorism to its source, he said.

‘Fire that you don’t extinguish will one day burn you’

On solidarity beyond borders, Erdogan said: “From the Balkans to Turkistan, from the Caucasus to Africa, we will continue to stand by each of our brothers in all our geography of the heart in all their days, both good and bad.”

He also stressed that for years Turkey has made clear to its Western friends about the fight against terrorism, saying: “If you don’t put out the fire of terror where you see it, one day it will surely spread to you.”

“Despite this, the same mistakes are still repeated. Here we are all watching the fate of those who do not listen to us,” he said.

“We don’t even want to think about the future of these countries, whose streets are covered with fire and blood, whose parliaments are occupied, and who are shaken by racism and Islamophobia,” Erdogan said.

“Countries which prefer to cooperate with bloody-minded terrorists rather than Turkey, one of the oldest states in the world, will get lost in a black hole unless they change their mentalities,” he said.

Turkey has long been frustrated by Western countries’ lack of cooperation in its fight against terrorists, including the YPG/PKK.

Earlier this month, after the PKK killed 13 people in a cave in northern Iraq, including 12 Turkish citizens, the US issued a conditional condemnation, saying it condemned the massacre “if reports of the death of Turkish civilians at the hands of the PKK… are confirmed.” Turkey blasted the statement.

Turkey also lambasted Western countries’ silence or belated condemnation in the face of the massacre.

Ankara has also criticized Western countries for allowing terror groups to operate on their soil, refusing to extradite terror suspects wanted by Ankara, or even cooperating with terror groups such as the YPG/PKK along its borders.

Over 11 tons of bootleg alcohol seized in Turkey