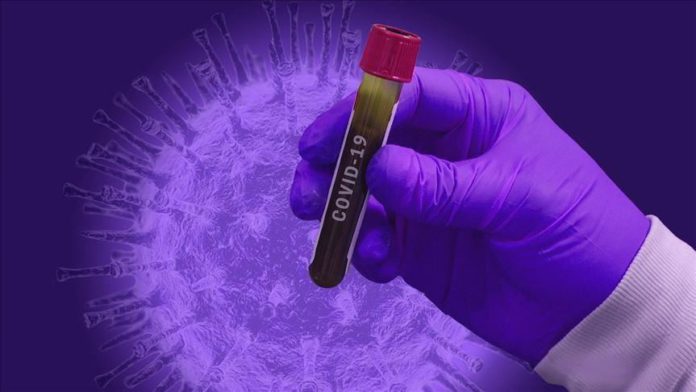 The infection cases and fatalities from novel coronavirus outbreak continued to rise across Eurasian countries on Thursday.

Ukrainian Health Minister Maksim Stepanov announced that in the last 24 hours, the number of cases in the country reached 22,382 with the detection of virus in 477 more people, 104 of whom were health care workers and 32 of them were children.

Out of total, 1,627 children and 4,345 health care workers were infected with the virus, Stepanov said, adding that the most cases over the past day were seen in Rivne, Lviv and western Ukraine.

He also said that around 10,300 tests have been conducted during the past day and the death toll rose to 669 with 11 new additions, while 444 more recoveries brought the total tally to 8,439.

In Ukrainian Armed Forces, a total of 162 cases have been found so far, with 102 recoveries and three deaths.

In Kazakhstan, the number of cases rose 272, bringing the total to 9,576, according to the Health Ministry.

With the quarantine still in effect, the activities of recreational facilities will be allowed as of June 1.

Kyrgyzstan reported 74 new cases, bringing the country’s total to 1,594. The number of recoveries reached 1,066 with another 23 patients regaining their health over the past day, according to Deputy Health Minister Nurbolot Usenbayev.

Usenbayev said that 2,338 tests were carried out in the last 24 hours, adding that total of 2,648 people are being kept under surveillance in hospitals, and 7,184 people are in home quarantine.

The statement by the Georgian government said that the number of COVID-19 cases rose to 741 with the detection of three fresh cases, while the number of recoveries was 573 in the last day.

The state of emergency and curfew in Georgia have ended on Saturday after nearly two months.

Death toll in country has stood at 12.

Prime Minister Giorgi Gakharia said the epidemiological situation in the country is under control.

According to the Armenian Health Ministry data, with 442 more cases recorded, the country’s tally climbed to 8,216, and the number of deaths increased by 15 reaching 113.

So far, 54,931 tests have been conducted in the country, while 3,287 people have recovered and 4,772 patients are receiving treatment.

A total of 552,000 tests have been conducted in the country so far, according to a top health authority.

Some 45,455 people are being kept under medical surveillance in the country.

In Moldova, two more people died of COVID-19, raising the death toll to 276.

A total of 7,537 cases have been reported in the country to date, including 4,123 recoveries, according to the Health Ministry.

Some 40,200 people are being kept under medical surveillance in the country.

Ten more people also tested positive in Moldova’s autonomous region of Gagauzia, raising the total to 386, while the region registered 15 fatalities so far.

More than 5.71 million cases have been reported in 188 countries and regions since the virus emerged in China last December.

The US, Brazil, Europe, and Russia are currently the hardest-hit areas.

The pandemic has claimed over 356,200 lives worldwide, while recoveries exceed 2.36 million, according to figures compiled by the US’ Johns Hopkins University.