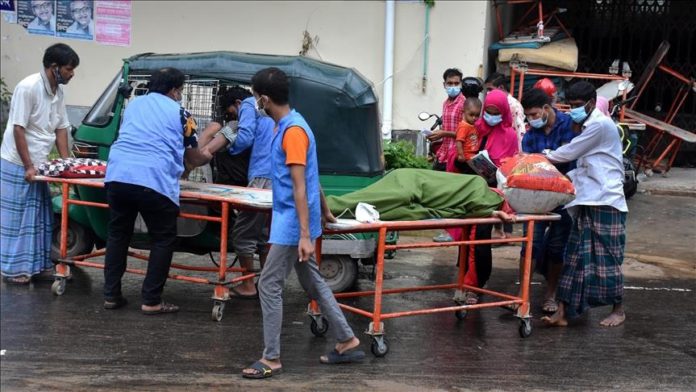 A growing number of critical patients were rushing to health care facilities on Thursday in Bangladesh’s capital of Dhaka as the coronavirus situation continued to worsen.

More than 239 people have died in the last 24 hours, taking fatalities to 20,255 while 15,271 new infections brought the nation’s caseload to 122,6253, according to the Directorate General of Health Services (DGHS).

The government extended the ongoing closure of educational institutions until Aug. 31 amid soaring infections, according to an Education Ministry circular late Thursday.

Bangladesh is among 19 countries that did not open schools during the pandemic despite calls from UN agencies to reopen campuses as learning continued to be disrupted.

Added to the distress of health professionals is a dengue fever outbreak that is taking a toll as several patients have been admitted to hospitals in a double blow to Dhaka since last week.

A record number of 194 dengue patients were admitted to hospitals Thursday, including 181 in Dhaka alone, according to the DGHS.

The government registered 2,292 dengue patients who were admitted to hospitals in January.

The DGHS reported 1,193 dengue cases and three confirmed deaths in 2020.

As COVID-19 cases rise, authorities lowered the age limit for those wanting to be vaccinated.

Those who are 25 and older are now eligible to be registered for the mass vaccination campaign.

Earlier, the government lowered the age limit from 35 to 30 and brought it down gradually from 55 as the pandemic continued to worsen and more vaccines started arriving.

Amid the alarming spike in infections with the presence of the Delta variant, Bangladesh has administered 12.8 million vaccine shots, including first and second doses.

The south Asian country has implemented a 14-day strict lockdown since July 23 amid surging cases.