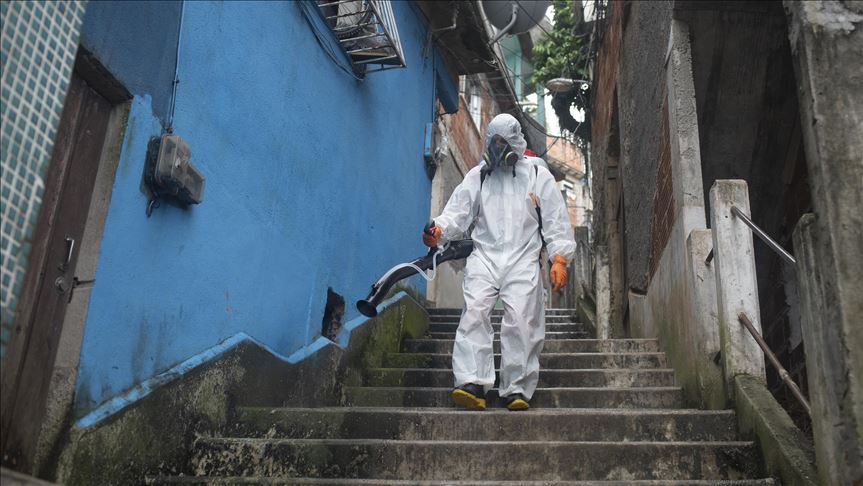 Latin America continued to struggle against the novel coronavirus Wednesday with Brazil reporting more than 1,000 deaths in the last 24 hours and Peru passing the 100,000 mark in cases as restrictions are being maintained or increased in the region.

In Europe and Asia, the hope of a gradual return to normal coexists with fears of a second wave, but in Latin America, the worst may still lie ahead, according to experts.

A day after Brazil became the country with the third-highest number of confirmed coronavirus cases in the world behind the US and Russia, it recorded its highest daily number of deaths. For the first time, the country reported more than 1,000 deaths in a single day from the virus, although experts say the outbreak is weeks away from its peak.

As of Wednesday, the country had 271,628 cases and nearly 18,000 deaths, according to US-based Johns Hopkins University.

US President Donald Trump said Tuesday that he was thinking of imposing a travel ban on Brazil.

President Jair Bolsonaro has defended the use of the anti-malaria drug hydroxychloroquine which Trump supports, despite concern that it may be unsafe.

Bolsonaro managed to ensure that even patients with mild symptoms of the coronavirus can be treated with the drug. Disagreements over the use of the drug led to the departure of two health ministers within a month.

The Ministry of Health in Peru has said that 80% of COVID-19 cases in the country are asymptomatic. The figure was confirmed in a report by the National Center of Epidemiology, Prevention and Disease Control, which demonstrated that only 20% of patients show symptoms.

There are a total of 104,020 infections with 3,024 fatalities. The country has the second highest number of cases in Latin America after Brazil.

Health workers in Mexico continue to be targeted amid the outbreak. Many have been assaulted, harassed and bullied as some people fear they could be infected with the virus.

More than 20% of the 54,346 people in Mexico infected by COVID-19 are health workers and 139 have died out of the 5,666 total fatalities reported in the country, according to the latest official figures.

Costa Rica is restricting trucks from entering through its northern border with Nicaragua, which is keeping more than 1,000 Central American transporters stranded on Nicaraguan highways.

Tensions mounted when Costa Rica began testing all truck drivers entering the country on May 8. According to Costa Rican authorities, 61 truckers have so far tested positive for the coronavirus, most trying to enter from Nicaragua and some entering from Panama.

That led Nicaraguan President Daniel Ortega to blame his decision to close the two border crossings with Costa Rica, which has reported 897 cases and 10 deaths.

Over the last few days, cases in Nicaragua have surged from 25 to 254, with 17 deaths. The numbers are hard to defend considering that Ortega’s government has not implemented social distancing measures, schools remain open and professional sporting events still take place.