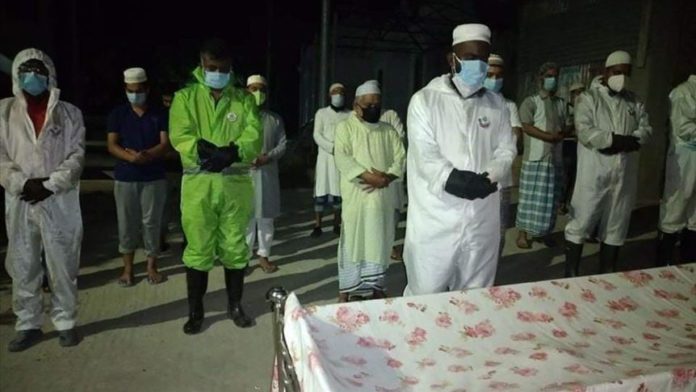 Bangladesh reached the grim milestone of 3,000 coronavirus deaths on Tuesday, while its overall case count moved closer to 230,000.

The Health Ministry said 35 more fatalities — 26 men and nine women — were recorded over the past 24 hours, raising the death toll to 3,000.

The figure includes 2,358 men and 642 women, according to the ministry’s data.

In terms of infections, Bangladesh has now overtaken Turkey in the list of countries with most COVID-19 cases and stands at number 16, behind Italy.

In the country with over 165 million population, more than 1.13 million tests have been conducted, with 12,714 more samples tested over the past 24 hours.

The infection rate in the country now stands at 20.15%, the ministry said.

At least 129 people have died in Bangladesh due to floods that have impacted half of the country since last month, according to a government update on Tuesday.

Ten more fatalities were reported in various flood-hit areas, while the number of people who have fallen victim to water-borne diseases increased by 1,637 to reach 12,321.

More than 2.4 million people, including around 1.3 million children, have been impacted by the floods that started around the end of June, with more than half a million — around 550,000 — families displaced from their homes, according to UN agencies.