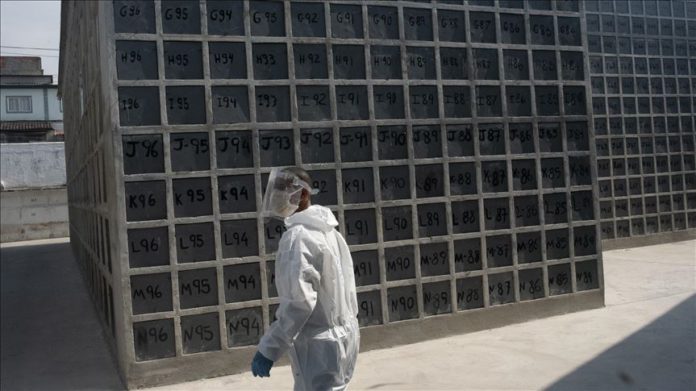 Latin America and the Caribbean exceeded 1.2 million cases of the coronavirus Friday.

Brazil and Mexico are among the fastest growing in the region but the virus is also on the rise in Peru, Chile, Colombia, Argentina and Bolivia.

Latin America currently accounts for almost 44% of global coronavirus deaths, but experts say it will not be long before the region, with 8% of the world’s population, accounts for the majority of global deaths.

Brazil, the hardest-hit country in Latin America, reported a new 24-hour record death toll. The number of fatalities stands at more than 34,000 — the third highest of any nation for COVID-19 deaths, surpassing Italy. Brazil has reported almost 615,000 coronavirus cases.

Peru´s coffin-makers have seen sales multiply as more than 187,000 infections and 5,162 deaths have been recorded, making it the second worst-hit country in the region.

Adding to the misery, it is currently facing a shortage of oxygen. The problem, which had mainly affected the Loreto region in the Peruvian Amazon, now extends to hospitals in the capital. As a result, families of the patients affected by COVID-19 are forced to buy oxygen, while its price has skyrocketed. President Martin Vizcarra issued an emergency decree ordering plants to ramp up production or purchase oxygen from other countries.

Figures are also rising sharply in Mexico that reported 4,442 new infections, a record number for a second straight day. Mexico has more than 105,000 reported cases and 12,545 deaths as of Friday.

In Argentina, health officials reported that during the last 24 hours there were 24 deaths and 840 new cases. The number of infections amounts to 21,037 and fatalities stand at 632.

Argentinian President Alberto Fernández announced the extension of a quarantine until June 28 but he eased obligatory isolation in 85% of the country where residents will see relaxed social restrictions as businesses reopen.

Colombia confirmed 1,515 new cases, bringing the number there to 36,635. It reported 58 deaths, the highest number caused by the virus in any day since the pandemic began.