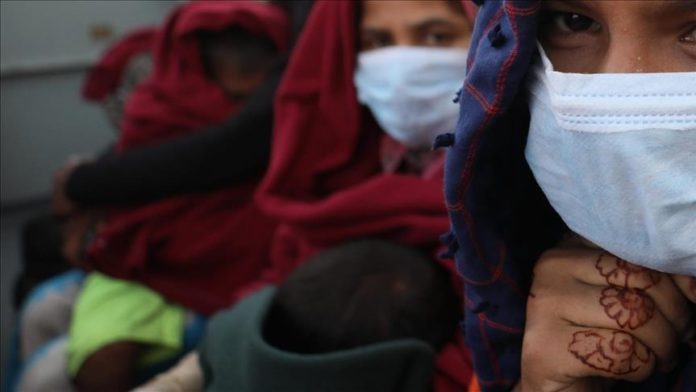 Pandemic cases are on surge at one of the largest refugee camps of the world in Bangladesh, where more than 1.1 million persecuted Rohingya Muslims have been living stateless for years.

According to the latest report of the Bangladeshi refugee commissioner’s office released early Thursday, 48 Rohingya have been infected by coronavirus in the last 24 hours, pushing the total cases in the refugee settlements to 1,921.

So far, 20 Rohingya in Bangladesh have died due to the virus in the camps located in the southern district of Cox’s Bazar, also the country’s main tourist hub.

To stem the spread of the virus in the squalid Rohingya makeshift tents, 744 Rohingya, including 58 who have been sent to isolation in the last 24 hours, are currently under quarantine.

“The cumulative number of contacts quarantined is 6,098,” the report added.

Meanwhile, Rohingya refugees in Bangladesh have also been demanding to be included in the vaccination drive.

“We are living here in Bangladesh’s camps in a very congested environment. On average, five to six people live in a single room while our tents are located in a row side by side. We frequently meet each other. So it’s urgent to vaccinate us immediately to avert any untoward consequences in near future,” Abdur Rohim, a Rohingya refugee at the Kutupalang camp, told Anadolu Agency.

Underlining the risk factors Rohingya have been facing, he added: “It’s really tougher for us to maintain social distance and other COVID-19 health instructions due to the congested environment and so we are at high risk of being contaminated by the viruses.”

Speaking to Anadolu Agency, Abu Toha MR Bhuiyan, the chief health coordinator of the Refugee Relief and Repatriation Commissioner, however, said the issue of Rohingya vaccination is under active consideration of Bangladesh.

“We expect that in collaboration with international aid agencies we will be able to launch the COVID-19 vaccination drive for Rohingya people soon,” Bhuiyan said.

Referring to the role of Turkey as the first respondent to the Rohingya crisis, he said they are also urging Turkey to help the launch of inoculation for Rohingya refugees in Bangladesh.

According to Amnesty International, more than 750,000 Rohingya refugees, mostly women and children, fled Myanmar and crossed into Bangladesh after Myanmar forces launched a crackdown on the minority Muslim community in August 2017, pushing the number of persecuted people in Bangladesh above 1.1 million.