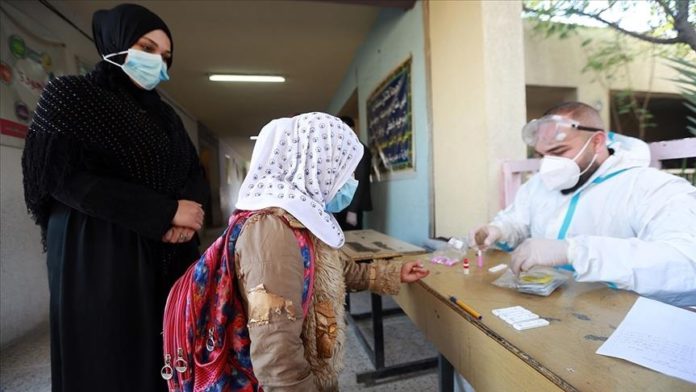 Another 37 people in Iraq died in the past 24 hours, pushing nationwide fatalities to 14,360, according to the Health Ministry.

Libya’s National Center for Disease Control reported 13 deaths over the past 24 hours.

The Health Ministry said 1,211 cases were recorded in the West Bank, 1,081 cases were reported in the Gaza Strip, while 61 infections were confirmed in East Jerusalem.

Palestine has recorded 273,231 coronavirus cases, including 2,901 deaths, since the first case of COVID-19 was detected last year, according to the Health Ministry.

Health officials in Jordan confirmed 82 new fatalities and 6,482 additional infections from the coronavirus on Thursday.

A total of 520,498 patients have won their battle against the virus.

The virus tally has reached 4,531 cases, including 906 fatalities, the National Committee for the Fight Against the Coronavirus said in a statement.

A total of 1,682 patients have won the battle against the virus, it said.

The figures relate to regions under government control since April 10 when the first case was detected.

Since it was first detected in China in December 2019, the coronavirus has claimed over 2.81 million lives in 192 countries and regions.

More than 129 million cases have been reported worldwide, with recoveries now over 73.2 million, according to figures compiled by US-based Johns Hopkins University.