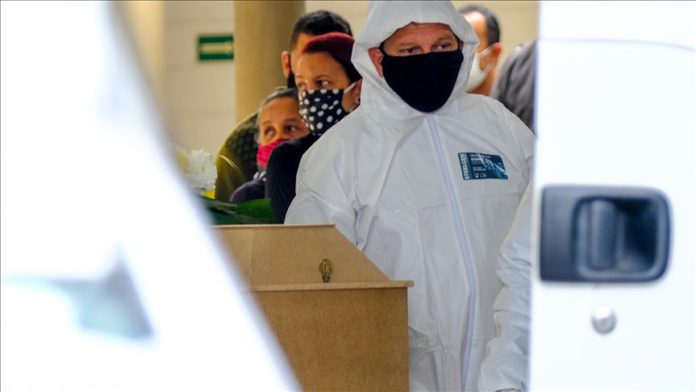 While COVID-19 cases are declining in many parts of Europe and Asia, they are still increasing in Central and South America, South Asia and Africa.

Although the measures adopted by most Latin American countries have involved strict social distancing and confinement, the coronavirus gives no truce to the region.

With more than 360,000 cases and 22,000 deaths, Brazil has become the world’s second major hotspot for coronavirus cases.

The US government has imposed travel restrictions on foreign nationals who have been to Brazil. Non-American citizens who have been in the South American nation in the two weeks before they request entry to the US will be denied that entry, the White House announced Sunday.

“Today’s action will help ensure foreign nationals who have been in Brazil do not become a source of additional infections in our country,” White House Press Secretary Kayleigh McEnany said in a statement.

As President Jair Bolsonaro arrived in Brazil’s capital Brasilia on Sunday, he greeted his supporters without wearing a mask or any protective equipment. Bolsonaro has demanded mayors and governors to lift restrictions aimed at stopping the spread of COVID-19, saying more people would die of hunger if the lockdown continues.

Thousands of Ecuadorians took to the streets on Monday to protest austerity policies implemented by the government. Big rallies organized by unions and other social organizations were seen in cities such as Quito, Guayaquil, Cuenca, Latacunga, Ibarra, Machala and Urcuquí.

In Quito, massive demonstrations were held, with protesters occupying several streets of the city. Protest signs read “Fuera Moreno, fuera!” (Out Moreno, out!) in reference to the country’s president, Lenín Moreno, who this Sunday celebrated his third year in power and began his last 12 months in the midst of an economic crisis aggravated by the coronavirus pandemic, which has claimed the lives of more than 3,200 people and infected more than 37,300 in the country.

Chile has set a new record for cases, adding 5,000 new infections every day, bringing the total number of people with the coronavirus to nearly 74,000. Public Works Minister Alfredo Moreno is the first member of the government to test positive for the virus.

“I have been notified that the COVID-19 test I took a few days ago was positive,” he announced on Twitter.

Moreno, who has not shown any symptoms, said he will maintain the quarantine that began last Friday for preventive purposes. Chile has recorded 761 deaths, 43 in the last 24 hours.

After being the only department in the country free of the coronavirus for weeks, the Beni region in Bolivia has been struck by a sudden outbreak of COVID-19, which has brought its health system to a collapse. The interim government said it will implement an “immediate action plan” with support from the Pan American Health Organization, which had been asked to help set up a 150-bed emergency hospital.

Former President Evo Morales called on the international community to help fight the coronavirus in the region.

“I call on the international community to mobilize and help my sisters and brothers in Beni. The situation is desperate and they need all the support in health personnel, supplies and medical equipment,” he said Monday on his Twitter account.

Aid to the region, which has a population of around half a million, came in recent days following reports of people dying in their homes and an unusual number of nearly a hundred burials in urgently dug graves in a cemetery.