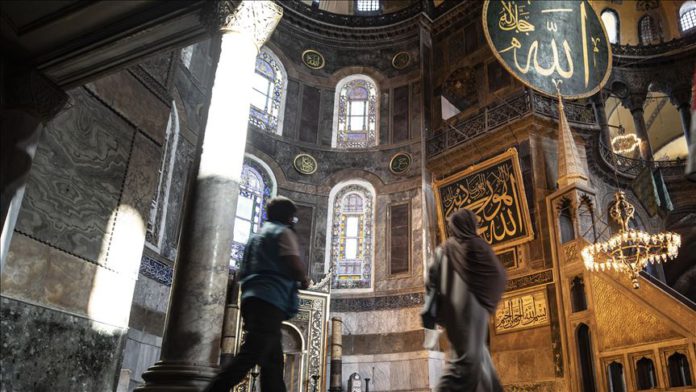 Some of the criticism directed to Turkey over the reopening of Hagia Sophia Mosque is “far-fetched” and its restoration is a “right of the Turks”, a British expert said Friday.

Speaking to Anadolu Agency, Abdullah Faliq, managing director of The Cordoba Foundation, said: “Today marks a historic moment for Turkey with the re-opening of the Hagia Sophia as a mosque again, some 86 years later.”

Faliq underlined that thousands of people offered Friday prayers in the iconic building, which is a “1,500-year-old UNESCO World Heritage site.”

Faliq, who is also the director of the Centre for British-Turkish Understanding, described the first Friday prayer in Hagia Sophia after more than eight decades a “joyous occasion” that millions watched live.

“Whenever I visited Turkey I would try to visit the Hagia Sophia, to marvel at its majesty and heritage, to take in the breath-taking and exquisite architecture, and simply wonder at its sheer scale and grandness,” Faliq said.

“But I could not help feel sad for not being able to pray inside the complex. This was a strange feeling as the complex looked and felt like a mosque – it had served as a mosque for nearly 500 years,” he added.

“Well as of today, the natural desire and wish of many to bow down in prostration to the Almighty would be just fine.”

Faliq said the “re-conversion of the Hagia Sophia into a mosque has had mixed reactions, and that is expected.”

“But some of the criticism seems to be far-fetched, not based on facts and simply Turkey-bashing.”

The re-conversion followed a legal process, he said.

“The complex still remains open to the public irrespective of creed or background. The historic and architectural treasures contained in Hagia Sophia remain intact and protected.

“Only during prayers will some of the images in front of the mosque will be covered without actually touching or damaging them. A lot of noise was made earlier, claiming that the artefacts would be destroyed and tying to liken President Erdogan and Turkey with the likes of the Taliban, Al-Qaeda and Daesh.”

Thousands of people took part in the historic Friday prayers both inside and outside the historic mosque in Istanbul, Turkey’s largest metropolis.

Before the prayers, Turkish President Recep Tayyip Erdogan recited verses from the Quran inside the reopened mosque, choosing from both the Surah Al-Fatihah and the Surah Al-Baqarah.

After the prayers, President Erdogan visited the tomb of Ottoman Sultan Mehmet II, also known as Fatih Sultan Mehmet, who conquered Istanbul from the Byzantine Empire in the 15th century.