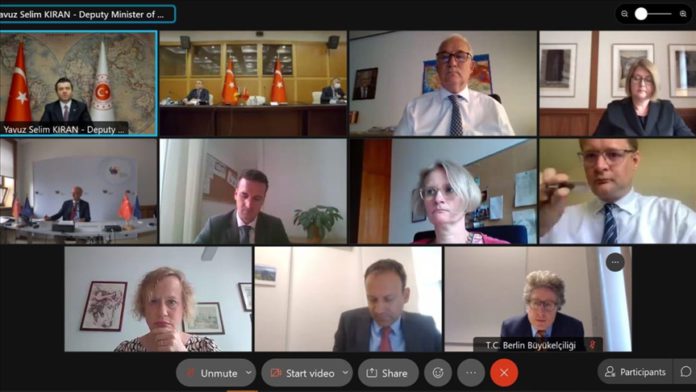 Turkey’s deputy foreign minister on Wednesday announced the initiation of consular consultations after a four-year hiatus.

“We started Consular Consultations w/ #Germany after 4 years. Consultations began with the participation of Antje Leenderste, State Secretary of the Ministry of Foreign Affairs, as well as our delegations,” Yavuz Selim Kiran said on Twitter.

Kiran said all kinds of issues that concern Turkish citizens in Germany were addressed during the talks.

Speaking at an online meeting with the German delegation, he said Ankara and Berlin have common interests in many regional issues and that stronger cooperation would bring benefit to both countries.

Kiran welcomed the recent remarks of German Chancellor Angela Merkel and Foreign Minister Heiko Maas on the update of the 2016 refugee deal between Turkey-EU and urged closer cooperation in the fight against terrorism.

Turkey has complained that while it upheld its end of the pact, the EU did not, including not fully providing €6 billion ($7.1 billion) in aid and backing away from their political commitments.

As part of the deal, the EU had promised to accelerate talks on Turkey’s EU membership, start negotiations on modernizing the 1995 Customs Union agreement between Turkey-EU, and visa-free travel for Turkish nationals within the Schengen area.

Stressing that Germany hosts by far the highest number of Turkish nationals living abroad, Kiran said half of the Turkish diaspora lives in the country.

“This also means that half of the consular work of our (Foreign) Ministry is devoted to our citizens in Germany,” he said, adding the Turkish community has become an indispensable part of the German community as this year marks the 60th anniversary of a migration deal between the two countries.

He noted that there are around 100,000 Turkish-owned companies that employ around 500,000 people in Germany.

On hate crimes targeting Turkish people and Muslims in the country, Kiran said xenophobia, racism, and Islamophobia are on the rise.

“Racist, verbal, and physical attacks against Turkish and Muslim communities have increased significantly,” he said, adding that 900 Islamophobic attacks took place in Germany last year, according to the country’s Interior Ministry.

He urged authorities to investigate the reasons behind such attacks and to prevent them.