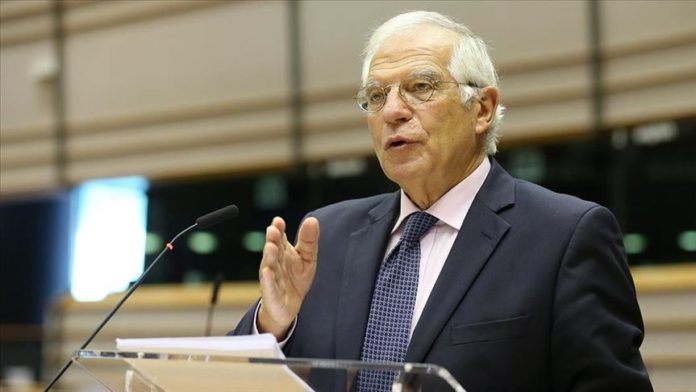 An “increasingly confrontational relationship” between Turkey and the EU will not offer any solutions to the problems surrounding Eastern Mediterranean, the bloc’s foreign policy chief said Tuesday.

“It’s clear that solution will not come from increasingly confrontational relationship. We don’t want it. Turkey is an important neighbor for EU, and we are not going to change geography, and will remain so,” said Josep Borell, speaking at the European Parliament.

Borell said the old empires are coming back and this creates a new environment.

“The empires are coming back. There are at least three of them. We can say Russia, China and Turkey, big empires in the past. They’re coming back with an approach on their immediate neighborhood and globally, which represent for us a new environment. And Turkey is one of these elements that changes our environment,” he said.

Borell said more efforts are needed to solve the crisis in the Eastern Mediterranean as he has been making efforts through the summer to reduce the tension.

He also said pausing Turkish drill ship Oruc Reis’s activities in the Eastern Mediterranean was “a step in the right direction.”

“It gives us some hope that it will lead to further steps towards dialogue, because, we are not going to solve it by military means, but through dialogue and negotiations,” he added.

In these meetings, there will be many options on the table in the absence of progress with Turkey, he added.

Asking for the European Parliament’s support to reduce tensions with Turkey, he said anything else would undermine efforts to resolve the Cyprus problem.

Borell also said: “Turkey is a key partner in many areas; migration, for example. It’s going to be difficult to believe that we can solve the migration flows without the help of Turkey.

“It’s an accession candidate, and a large majority of its population embrace our values and look for the European Union as a societal model. But it’s clear that the development in Turkey and Turkey’s actions put into question, how our relations will develop in the future. And we have to look for an answer for these questions urgently.”

Despite opposition from Greece and some other countries, Turkey has repeatedly extended its research vessel Oruc Reis’s energy exploration in an area within Turkey’s continental shelf.

Ankara has also stressed energy resources near the island of Cyprus must be shared fairly between the Turkish Republic of Northern Cyprus and the Greek Cypriot administration.