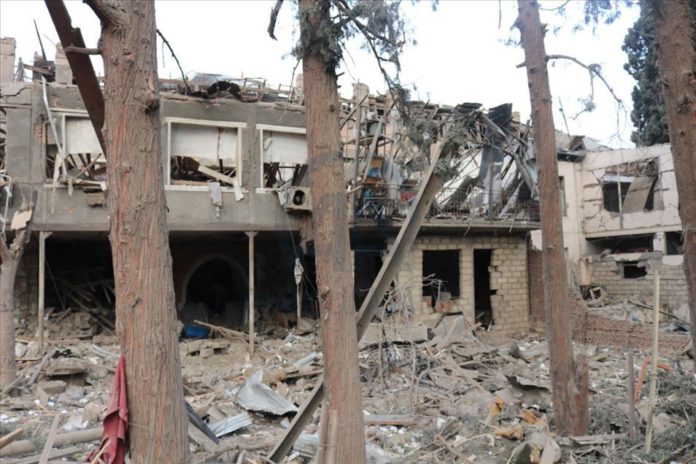 A top Azerbaijani official on Sunday called on the international community and the OSCE Minsk Group, which carries out the Nagorno-Karabakh peace process, to condemn Armenian attacks in Ganja city despite a cease-fire.

“Armenia on one hand pleas for truce, but then commits an act of terrorism against civilians,” Hikmet Hajiyev, assistant to the Azerbaijani president told a press conference in the capital Baku. He was accompanied by Azerbaijan prosecutor Kamran Aliyev.

GANJA, AZERBAIJAN – OCTOBER 11: (—-EDITORIAL USE ONLY – MANDATORY CREDIT – “PROSECUTOR’S OF AZERBAIJAN / HANDOUT” – NO MARKETING NO ADVERTISING CAMPAIGNS – DISTRIBUTED AS A SERVICE TO CLIENTS—-) A view of residential area destroyed during Armenian army’s alleged attacks with long-range missiles, on October 11, 2020 in Ganja city of Azerbaijan. The Armenian army continues to target civilian settlements, far from Azerbaijan’s front line despite just hours after a ceasefire between Armenia and Azerbaijan came into force.

While a building has been destroyed, at least nine civilians have been killed and several others injured in the Armenian attack.

“They resort to such acts to compensate for their failures on the battlefield,” he said.

Calling on the global community to condemn and evaluate the missile attack, he said all information will be sent to international organizations.

“They should see how Azerbaijan is dealing with a coward, dishonest and despicable side [enemy],” he said, adding: “There are no moral or political or diplomatic limits for Armenia. The people of Azerbaijan saw this in 1992 in Khojaly.”

The situation is different now, and Azerbaijan has a strong state and army, Hajiyev argued.

The recent clashes began on Sept. 27, when Armenian forces targeted civilian Azerbaijani settlements and military positions in the region, leading to casualties.

A new armistice was agreed on Saturday to allow an exchange of prisoners and the recovery of bodies, but it has been violated by Armenia.

Turkey has supported Baku’s right to self-defense and demanded the withdrawal of the occupying forces.