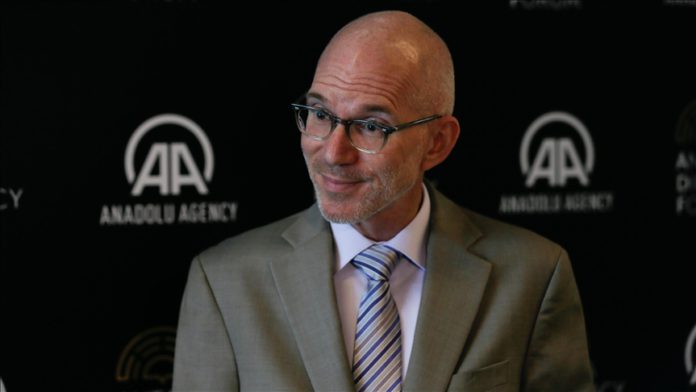 The UN’s special envoy to Somalia said that completing the electoral process on time and based on consensus in the Horn of Africa country is “critical.”

“Completing this electoral process on time and in a consensus-based way that enjoys support from the Somali people is really critical to addressing other priority needs in the country for the benefit of the population,” James Swan told Anadolu Agency on the sidelines of the three-day Antalya Diplomacy Forum (ADF) which closed on Sunday.

“This is an important moment for Somalia,” said Swan, who is also the head of the UN Assistance Mission in the country.

Somalia has witnessed a political stalemate after presidential and parliamentary elections were delayed and the president’s constitutional mandate expired on Feb. 8.

An agreement between the central government and regional leaders in the town of Dhusamareb on Sept. 17 last year was seen as a major step toward Somalia holding indirect parliamentary and presidential elections in late 2020 and early 2021, respectively.

It had since stalled as the country’s divided political leaders differed on how to proceed with the elections.

Noting that ADF in Turkey was a very fruitful platform, Swan said that he had a number of bilateral meetings to address specific concerns related to Somalia.

As part of the forum he met with officials from Qatar and Kenya plus he had a discussion with Turkish Deputy Foreign Minister, Sedat Onal.

“More than 20% of the population is facing acute food requirements. And out of a total population of about 15 million people, nearly 6 million require some element of humanitarian assistance.

“So the United Nations partnered with the Somali government to advocate for humanitarian response plan. This year the requirement is more than $1 billion. And that covers everything from life-saving emergency assistance to food aid to cash transfers to addressing the needs of the refugee population and the like. And it’s thanks to generous support from donor countries that we are able, working with the Somali government to respond,” he said.

On steps to be taken to support Somalia, Swan said: “There are many international partners, actively interested in Somalia. And Turkey is certainly prominent among them.”

“Turkey is involved in support for the security sector, they’re involved in humanitarian activities. Turkey is also very active in terms of private sector relationships,” he added.

Recalling the agreement reached last month by the federal administration and state leaders in Somalia to resolve the election crisis that brought the country to the brink of civil war, Swan said: “Among core priorities at this time in Somalia, or moving ahead with elections, they’ve recently concluded an agreement that will permit that to proceed on a rapid timeline.”

“In addition, there remain very serious security challenges, particularly as a consequence of the presence of Al-Shabaab terrorist organization in the country. But in addition, as you already raised the humanitarian needs are acute, and of course, we can’t lose sight of longer-term development objectives in the country,” he added.

“We’ve been very actively working over the past several years, to overcome an impasse, and communication between the federal government, and some federal member states,” he said.

“And that impasse really blocked progress on election planning on constitutional reform on the fight against al Shabaab and so many other priorities,” he added.

“So we’re very pleased that in the past six weeks, the Prime Minister [of Somalia Mohamed Hussein Roble] has led a series of discussions with federal member state leaders, they agreed on the 27th of May, to a set of actions to implement the electoral process on a short timeline, and we’re actively supporting that,” he said.

Noting that they had many engagements with the Office of the Prime Minister on the issue, he said: “I recently led a multilateral delegation of the African Union, European Union, Intergovernmental Authority on Development and the United Nations in meetings with federal member state leaders to ensure that momentum is sustained and that they continue to move forward on the election implementation.”