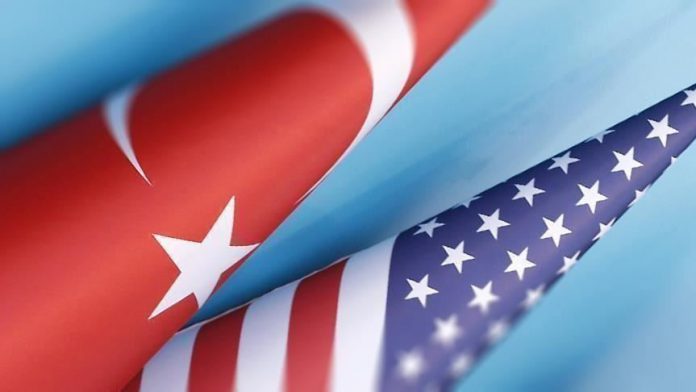 By Dr. Adam McConnel
– The writer teaches Turkish history at Sabanci University in Istanbul. He holds an MA and PhD in history from the same university.

“… I venture recall views I have expressed Department that USSR not interested in revision Montreux Convention on merits but seeking make use Straits question in order destroy Turkish independence, establish ‘friendly’ regime Turkey, thereby closing one remaining gap in chain Soviet satellite states from Baltic to Black Sea. It strikes me maintenance Turkish independence has become vital interest US.”

“But our military partnership with the SDF, never accepted by Turkey, over time seriously riled the Turks and seems to have caused them to see the YPG militia, the backbone of the SDF, together with the PYD political party, as an existential threat.”

George Kennan’s “Long Telegram”. Clearly that’s what William V. Roebuck had in mind while he typed up his wrought, bleating missive to the State Department at the beginning of November. [1] But Roebuck, steeped in illusions, does not realize that his message reads like a Heart of Darkness written from Kurtz’s perspective.

Roebuck played his role as “the lone U.S. diplomat on the ground in northeastern Syria” watching over the U.S.’s “Montagnard army,” aka the PYD/PKK. The methods implemented were not only “unsound” but also illegal according to U.S. law because the PYD/PKK is designated “terrorist” by the U.S. government. Roebuck laments the end of his militants’ violent, proto-state fantasy, “the wastes of his weary brain haunted by shadowy images,” but ten divisions were not enough to end the U.S.’ “troubles” in Syria.

The U.S.’ “trained cadres” in northern Syria are in fact monsters, driven by a radical, violent ideology to wantonly kill not only Turkish security personnel and civilians, but any Syrian civilian — Arab, Kurd, or other — who does not accept their domination. The man those militants “worship like a god” is not Roebuck, but Abdullah Ocalan, a designated terrorist, and the founder of the PKK. They even have a contingent of Captain Colbys. The only detail missing from Roebuck’s wire, which unintentionally lays bare the U.S.’ gross misconduct in Syria and the ignorance of those directing that misconduct, is a whispered “the horror, the horror” to function as a conclusion.

Nearly 75 years have passed since the events triggering the formation of the Turkish-American alliance transpired. In light of the current state of relations between the two governments, the American mistakes that have caused the impasse, and the ongoing wave of misinformed hatred aimed at Turkey by various groups and actors in U.S. politics and society, reviewing exactly what provided the relationship’s original basis seems appropriate.

The Turkish-U.S. alliance originally was a product of WWII. Beginning in early 1943, the Allies, but especially Britain under Prime Minister Winston Churchill, began a concerted effort to bring Turkey into active military operations. Churchill wanted Turkey’s involvement despite knowing that Turkey’s military was completely unprepared for WWII combat operations. Subsequently, throughout 1943, the Allies made promises to provide weapons and supplies to Turkey in return for its entry into the war, and Turkish President Ismet Inonu found ways to avoid committing to that step. In the end Turkey would not declare war against Germany until February 1945.

Meanwhile, early 1943 also saw Germany’s final defeat at Stalingrad, which began the USSR’s two-year effort to reconquer Eastern Europe from the Nazis. In the early months of 1944, as the war’s outcome became clear, Allied attention began to focus on the postwar order. Concurrently, Stalin began to perceive Turkish war neutrality as an opportunity to gain concessions through the USSR’s status as a victorious power. The first result was the Soviet note to the Turkish government in March 1945, stating that the Friendship Treaty between the two countries needed revision.

The March 1945 Soviet note began a process that played out over the following sixteen months, until August 1946, during which U.S. officials became concerned about Soviet intentions in several different regions, including Turkey’s. The development that finally precipitated U.S. action was another Soviet diplomatic note to the Turkish government in August 1946, which asserted that the Montreux Convention (the 1936 treaty that regulates traffic through the Bosphorus and the Dardanelles) needed to be renegotiated.

The decisiveness displayed by contemporary U.S. officials was striking. Though the Soviet note was written with a strictly diplomatic tone, Moscow’s intent was immediately clear and mandated a fundamental change in U.S. policy towards Turkey. U.S. Ambassador Edwin Wilson’s communications to the State Department at that time are a stark contrast to Roebuck’s. Wilson had no illusions about the implications of Soviet pressure on Turkey: the vital interests of the U.S. were at stake in the struggle to maintain peace and stability in the Eastern Mediterranean.

After August 1946, the U.S. government saw defending Turkey’s sovereignty as a matter of policy that had to be backed up with economic and military aid. In 1947, Britain’s abdication of responsibilities in the Eastern Mediterranean led to the Truman Doctrine and the Marshall Plan; America’s pursuit of the same geostrategic imperatives would eventually result in Turkey’s accession to NATO in 1952.

The chain of events leading to Turkey’s NATO membership deserves close examination because it involved threats to Turkish territory and sovereignty that were perceived, but had not yet taken immediate or physical form. At no point was the USSR mobilized to invade Turkey in that entire stretch of time. Instead, simply the understanding that Stalin intended to threaten Turkey at some point was sufficient to spur U.S. officials to action. The risks and necessary responses were defined with a realism that left no place for fantasies or daydreams.

Fast-forward to the current juncture in Turkey-U.S. relations. First of all, for the past decade the U.S. has displayed no will to resist Russian encroachment on sovereign states in Turkey’s region. This series of weak U.S. reactions to Moscow’s aggressiveness repeatedly brought to mind George Kennan’s prescription for meeting the Soviet threat: “… it is clear that the main element of any United States policy toward the Soviet Union must be that of a long-term, patient but firm and vigilant containment of Russian expansive tendencies” (as explained in Kennan’s famous “X” article). The sum of the U.S.’s failure is that Russia has carved up Georgia and Ukraine, and become the main power broker in Syria.

Furthermore, the U.S. sees as its Syrian “partner” a terrorist organization, the stated goal of which is to break territory off of Turkey in order to establish its own state. 75 years ago, even the suggestion that Moscow had malicious intent towards Turkish territory or sovereignty was sufficient to push the U.S. to bring Turkey into NATO. But now, the U.S. openly supports another organization that has the same goals.

The vital fact that foreign observers, especially U.S. citizens, should be aware of is that the U.S. has been helping the PYD/PKK establish the foundations for a state. That eventuality, the likelihood of which was greatly reduced by Operation Peace Spring, would have meant more instability for the entire region for at least two reasons. Most importantly, such a state would project a Kurdish identity that would be used to promote independence movements in regions of Turkey, Iraq, and Iran that have large numbers of Kurdish citizens. For example, a Northern Syrian Kurdish proto-state would quickly inspire campaigns for unification with the Kurdish Regional Government (KRG) in Northern Iraq – not much imagination is necessary to foresee this. But such a movement would spark yet more violence and disorder across the region.

Second, a PYD/PKK proto-state’s ideology would be similar to the Ba’athist ideology of the Damascus regime, but with Kurdishness functioning as the nationalist element. Ba’athist ideology, the combination of socialist/Marxist ideas with a broadly-defined Arab ethnic nationalism, is actually a type of proto-fascism. That is the primary reason why systems as seemingly different as the Assad family’s Alevi regime, Saddam Hussein’s Sunni-dominated dictatorship, and the Egyptian military governments from Nasser to Sisi have produced similarly oppressive and violent results.

The United States: A revisionist power allied with the PKK

Finally, U.S. aid for the PYD/PKK’s state-formation effort is the latest episode in the U.S.’s post-Cold War support for redrawn borders and statelets. In other words, the U.S. became a revisionist power in the late 1990s when it supported the independence of Kosovo from Serbia. The U.S. also supported the emergence of South Sudan and, most recently, eagerly accepted Israel’s annexation of the Golan Heights.

In sum, the U.S. no longer behaves towards Turkey and its region with the vision and wisdom that guided the decisions made in WWII’s immediate aftermath. Naturally, many would argue that this has been the case since the Johnson Letter, but that incident concerned hypothetical situations that never materialized. The current situation in Turkish-American relations is entirely different because it consists of concrete events and decisions.

As an illustration, we should once again look at Roebuck’s message, which consists almost entirely of PYD/PKK talking points. That is not just a matter of the numbers and claims that Roebuck lists; the perspective reflected by Roebuck’s comments is in fact that of the PYD/PKK, and specifically that of “General Mazloum” (whose real name is Ferhat Abdi Sahin and who is one of the PKK leadership’s highest-ranking figures). That is, the primary U.S. official on the ground in Northern Syria does not have the ability to analyze the situation independently from the information and perspective he receives from a terrorist organization.

In reality, the U.S. is no longer a key actor in Syria, as Roebuck concedes. Russia, Turkey, and Iran are the key actors and will remain so for at least the near future. Meanwhile, many observers concerned with Turkish-American relations are expending great effort to identify how the relationship can be put back on track. But as long as the U.S. makes decisions that pose direct threats to Turkish territory and sovereignty, no one should expect dramatic policy reversals from the Turkish government.

For his part, President Trump now openly states that the U.S. will settle for looking after Eastern Syria’s oil. That is how far U.S. foreign policy and stature has fallen. Trump’s appointment of former Exxon CEO Rex Tillerson as Secretary of State looked like a humorous, ironic joke at the time, but apparently Trump was serious. In the past, claims that U.S. foreign policy aimed at controlling global oil supplies would spark angry denials from U.S. officials and citizens. Now President Trump, in order to keep his electoral base happy, repeatedly tweets that the U.S. “has secured the oil.” Truly dramatic shifts have occurred in U.S. politics over the past 25 years.

As U.S. officials continue to insist on fundamentally misguided policies, are unable to develop the vision to discern their mistakes, and lack the will to support those sacrificing their lives for democracy, the same whispered refrain accompanies the American empire’s increasingly evident decline: “the horror, the horror.”